Home-brewed ginger beer packs in more punch than store-bought ones. Lower in sugar, this effervescent drink made with Bentong ginger and turmeric has mild, woody undertones with pronounced spicy and sweet aromas. A potent brew for chasing away indigestion and tummy aches.

1. For the ginger bug (a naturally fermented soda starter), combine A ingredients in a jar and shake. Keep adding A to feed the ginger bug for 5 consecutive days. Let it stand at room temperature to ferment.

2.  For ginger water, combine grated rhizome and sugar in a large saucepan. Bring it to a boil over medium heat until sugar dissolves. Set it aside to cool, about 3 hours. 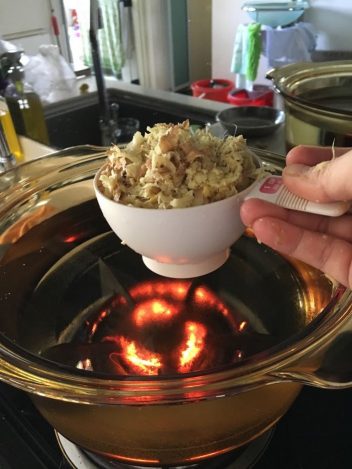 3. Once the ginger solution has cooled down, use a muslin cloth to strain mixture into a large mixing bowl. Discard grated ginger.

4. Pour in lime juice and add zest if desired. A squeeze of refreshing citrusy acid balances flavour and tones down the alcoholic kick.

5. Tip in entire contents of ginger bug. Stir vigorously with a whisk to blend ingredients.

Transfer cooled down brew into sterilised glass bottles, filling it about ¾ full only. Liquid should stop at least 12-15 cm below bottle neck (see explanation in step 7). Cap bottles tightly.

6. Allow brew to stand in a dark and warm kitchen cabinet for 3 days. Fermentation process begins. As it ferments, natural carbonation causes gas to build up and expand within the bottle. It is critical to release the gas through a process called popping, otherwise, bottles will crack, eventually causing them to explode from the pressure build-up.

7. To pop (releasing carbonation that causes fizziness), loosen cap with a thumb to gently release some gas. Using the other thumb, hold cap firmly in place as beer fizzes and hisses while gas escapes. It will become frothy with thousands of bubbles pushing upwards the bottle neck. It may spill, so always pop beer inside the kitchen basin. Exercise caution – beer may shoot up to the ceiling if there is too much carbonation in bottle. Make sure to release carbonation build-up every day. 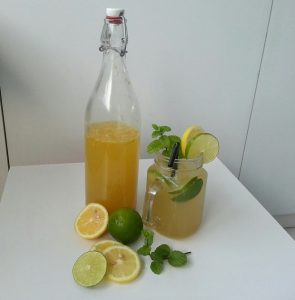 NOTE:  Ginger beer can be refrigerated. However, refrigeration slows down fermentation – pop every 4 days.

TIP: Bentong ginger produces a spicier brew with a bite. Cultivated in Malaysia, Bentong ginger thrives in the cooler climes of Bukit Tinggi’s hilly terrain in Pahang. Highly sought after because it is hardier and devoid of fibrous pulp making it much easier to digest. Although it has a thinner skin, the Bentong species has a longer shelf life compared with its larger, chunkier and less gingery Thai counterpart.

TECHNIQUE: *Ginger bug is likened to a starter in sourdough bread-making. Freshly grated rhizome is fermented in a water-sugar solution wherein natural enzymes and probiotics are released. Sugar feeds good bacteria that are essential in fermentation. The more ginger bug is added, the faster it transforms into ginger beer. The brew will carbonate (carbon dioxide being released) throughout the fermentation process. So, don’t fill bottles with beer all the way to the top. The gap between the liquid and bottle rim is to allow space for gas build-up.

You might also want to try these Whip It UP! recipes:

Szechwan Twice-Cooked Pork — Whip It UP!

See also  Is What You're Doing Today Good For Tomorrow?