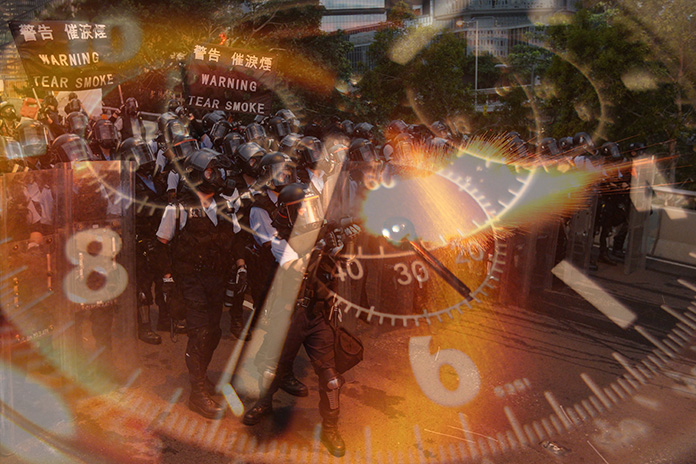 THE MONTHS of violent protests in Hong Kong are causing Swiss watch companies to watch proceedings with some concern.

The protests were initially over an extradition bill and when that was suspended, it shifted focus to the government of embattled leader Carrie Lam.

Hong Kong is the largest export market for the Swiss watch industry. But it has taken the first significant knock this year, with timing coinciding with the Hong Kong protests.

In June, while markets like the US (7.2%) UK (12.7%), China (1.7%) and Singapore (1.7%) registered increases in value for Swiss watch exports, Hong Kong posted a record drop of 26.8%. Based on figures from the Federation of the Swiss Watch Industry FH, watch exports dropped by 10.% in June, to 1.7 billion Swiss francs. And it is expected to continue to cool as things have heated up in Hong Kong.

Hong Kong is a major trans-shipment centre for watches, and now distributors are stuck with stock.

Denis Ta, of Storm Asia Pacific, is a retailer and distributor in Hong Kong, with a store in the popular Times Square shopping mall in Causeway Bay. He says that business has been affected with tourists and local shoppers keeping away from the hot spots.

But while the demonstrations have a considerable effect on the watch business, the general signs have been indicative of a slowing down.

Swiss watchmaker Giuseppe Picchi says that a slowdown has been noticeable in Switzerland, with demand for services within the industry dropping.

Picchi, who runs a training school for watchmakers is also the technical head of Azimuth Watch.

“In the past, factories relied on assemblers. But now the businesses are restructuring and relying on semi automation. The watchmakers are moving into after sales rather than manufacturing,” he observes.

“The demand for watch assemblers in the production line has been dwindling and only watchmakers with higher skill sets are able to find openings in aftersales service or as a constructor.”

It’s a global phenomenon that’s resulting from the disruptive influence of technology and could have a more telling effect than the flashpoint in Hong Kong.

See also  Are You Ready To Work For Yourself?