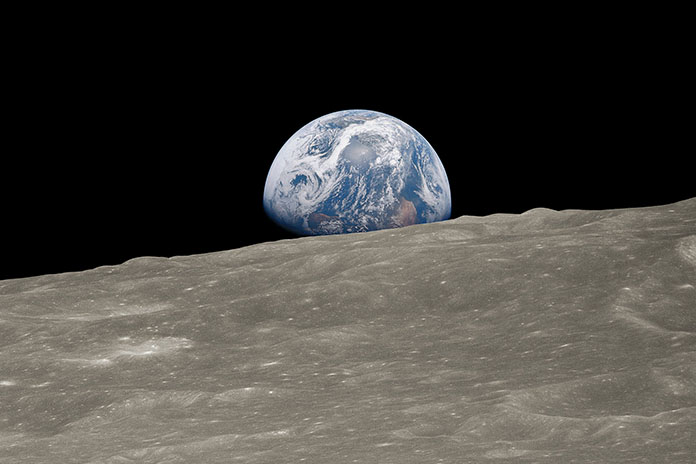 SPACE is tempting mankind to venture into the bleak void again.

On the 50thanniversary of the Apollo 11 mission that put a man on the Moon, interest in putting more men on that rock and maybe beyond, on Mars, has inspired the Artemis lunar exploration programme.

The space race originally kicked off in the late 1950s — a dash between Cold War rivals Russia and the US to escape Earth’s gravity.

The Soviets put the first man-made object into space, when they launched the satellite Sputnik on 4 October 1957. They followed that up two years later with the first space probe, Luna 2, to hit the Moon. A couple of years later, the Soviet cosmonaut Yuri Gagarin became the first person to orbit Earth in Vostok 1.

But the US pumped up the pressure and the funding in National Aeronautics and Space Administration (NASA) and launched Apollo 8, its first manned space mission to orbit the Moon, which yielded the amazing photograph Earthrise (top photo) by astronaut William Anders.

On July 20, 1969 Neil Armstrong became the first man to walk on the Moon’s surface, “winning” the space race. The late Armstrong would have turned 89 on August 5 this year.

These space adventures fascinated a young girl in Brazil who had stars in her eyes.

Dr Rosaly Lopes grew up near Ipanema, famed for the Antonio Carlos Jobim bossa nova Grammy winner The Girl From Ipanema. But it wasn’t showbiz that interested her.

Her gaze was firmly locked on the skies.

While space explorers drew her imagination heavenwards, it was something more down to earth that would anchor her attention and set her on the course to becoming a vulcanologist. Dr Lopes and Mount Etna would find each other on a fateful day in 1979. When it erupted, she was mesmerized by the fire spewing up and the lava flowing down. It was a spectacular show that lit her fire for volcanoes.

After getting her doctorate in planetary science at the University of London, she joined Jet Propulsion Laboratory (JPL), owned by NASA and managed by the California Institute of Technology (Caltech).

Dr Lopes worked on the Galileo mission, studying vents on the most volcanically active spot in the solar system, Jupiter’s moon Io. She is also analyzing data from Saturn’s moon, Titan.

She still does a lot of work on Earth, hitting the hot spots to understand volcanoes better.

“You’ll never understand volcanoes in Mars if you don’t go to a volcano on Earth,” she reasons.

“The brain processes more information when you are there. There are things that humans can do faster than a robot,” Dr Lopes explains.

“Humans are more efficient when it comes to making judgements which can’t be duplicated yet. Like deciding which rock sample to take from another planet.”

Hence the importance of having crewed missions as part of the Artemis programme.

Volcanoes on Mars are huge compared to those on Earth. “Some are 26km high and 600km across.”

On Earth, the tectonic plate movements prevent volcanoes from growing as large.

Dr Lopes would have given anything to have gone into space but has to be satisfied eyeballing them from afar. She does get to travel around Earth trying to understand the “quirks” of volcanoes.

The impact of a potential eruption could leave much damage in its wake. Accurate prediction will save lives. But an untimely evacuation could have devastating economic impact.

Dr Lopes believes that “humans in space serves as an inspiration” for what can be achieved.

See also  Joy And Sorrow At The European Film Festival