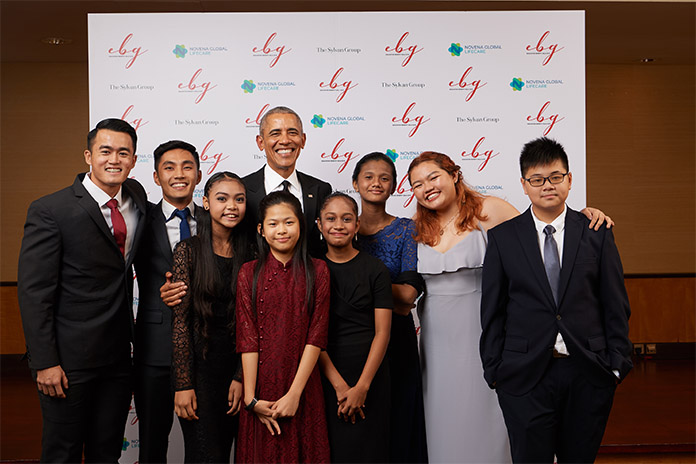 AT THE recent fundraiser, the Education Benefit Gala, President Barack Obama was the main attraction, drawing a full house.

At the event which raised funds for needy students, the 44th President of the United States spoke with the ease and eloquence the world has grown accustomed to during his two terms in office, about many aspects of his life and leadership.

The hour-plus talk was wide ranging, and covered incidents that would steer him onto the path to the Presidency.

(You can read the earlier article on the discussion, President Obama Pushes For Change.)

One recollection about his early years probably resonated with many in the audience, some of whom may have had to beat their own path to riches.

President Obama On Living In The Material World:

“I was raised by a single mother. She did a remarkable job. It was hard to do alone.

I was lucky to have this incredible partner — Michelle Obama — who was able to cover for me when I wasn’t there. She was mad at me. But she still did a great job.

I was — when I met Michelle — not somebody who was interested in money. And she noticed that because my car was really bad. It had a hole in the floor. That was my form of air-conditioning. You could see the road running by. It was a rust spot in the bottom.

I was a student at Harvard. I had the potential for making money but that was not what I was interested in.

Obviously, over time she convinced me that we should have decent sheets and we actually need to raise our children.

Our standard of living improved. Even when I was a US Senator we were a middle-class family and we went to school on scholarships and student loans. We were still paying off our student loans for a decade after we graduated and we were saving for our kids’ education.

And then I wrote a book — Dreams from My Father: A Story of Race and Inheritance (1995) — that didn’t sell that well because nobody read it. And then I gave this speech at the 2004 Democratic National Convention, and then Oprah Winfrey had me on her show and people started reading the book.

Suddenly we had some money.

It’s not a story of rags to riches. I was not in rags. Neither Michelle or I came from privileged backgrounds.

I’m not somebody who suggests that money is completely unimportant. You need enough.

The degree to which our values are determined is based on not just having enough, but having excess that is manufactured.

We manufacture material needs and desires which we don’t require. And we adjust to them very quickly.

The thing that ends up satisfying over time are not the (material) things you have, but the relationships you have — people, the friendships, the love you have with your partner or your family, the ability to give back to people.

It’s a sense of accomplishment and achievement.”

Picture: President Obama with beneficiaries from the programmes organised by Novena Global Lifecare and The Sylvan Group, co-organisers of the Education Benefit Gala.

See also  Which Parenting Style Works For You?