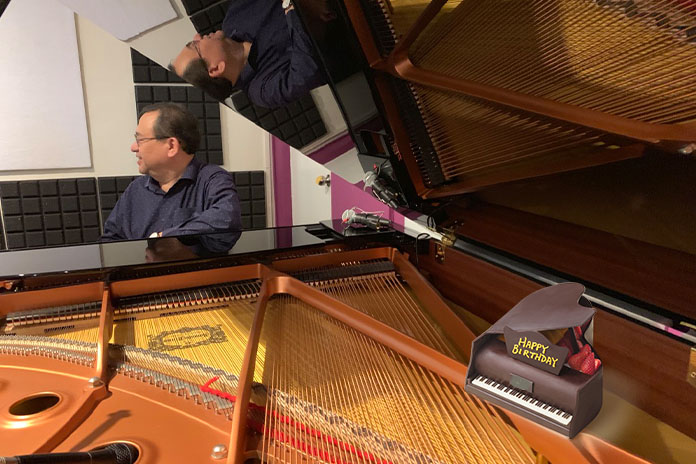 TO THE optimist, every dark cloud has a silver lining.

For the world, COVID-19 is a serious dark cloud that hangs heavy with uncertainty over everyone.

For Jazz pianist Jeremy Monteiro, the cloud is hard to miss as concerts have dried up and opportunities to monetise his music has been put on hold.

But Jeremy has still spotted the silver lining. Where others would have thrown up their hands in despair, he saw the opportunity to push into the digital space.

Regular jam sessions with musicians around the world helped build up his capability in organising virtual concerts. And even if COVID-19 is hanging around longer than expected, it has in no way prevented Jeremy from celebrating his 60th birthday with friends and fans around the world with the kind of party he hoped for, but never envisioned would happen to this scale.

Jeremy is putting on a who’s who of Jazz show on Sunday 19 July at 8pm online, on Facebook and YouTube.

The silver lining for Jeremy was the fact that the pandemic forbade musicians from engaging in their usual tours and engagements. Suddenly they had time on their hands. And they had time for Jeremy.

Wynton Marsalis, Laura Fygi, Nathan Hartono, Michael Veerapen, Bob James, Ernie Watts, Carmen Bradford and Randy Brecker are just a small part of a stellar roster of highly regarded musicians not having to go out to have a good time celebrating this virtual birthday concert.

Jeremy has worked tirelessly to reach several highs in his life and career, but describes this as a “pinch-me” show for its outstanding attributes. Sometimes the strange twists in the world can conspire to make things even more outstanding.

Just go with the flow and improvise!