It isn’t just a wave of nostalgia washing over jazz pianist, composer, band leader and educator.

It’s to prepare you to receive his upcoming release of six of his albums on vinyl.

Monteiro’s latest album, With A Little Help From My Friends, a tribute to the music of the Beatles, will be released on vinyl soon and is already available for download on the iTunes store. The official launch takes place on July 12 and 13 with his concerts, Jazz The Beatles, at the Esplanade Recital Hall.

Also due for vinyl release is an upcoming album of Teresa Teng tracks, prior to Monteiro’s upcoming China tour. 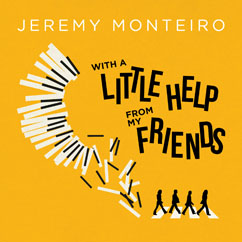 asionally takes a break from jazz, lending his views and expression to other artists’ works.

The music of Beatles has influenced many contemporary artists. For Monteiro, who grew up on the Lennon-McCartney compositions, it was the documentary, Eight Days A Week by Ron Howard, that reinforced the Fab Four’s brilliance.

“I saw how fantastic they were playing live with just four mics and my respect for them as performers went up a lot.”

WIN AUTOGRAPHED COPIES OF THE CD. DETAILS BELOW.

With A Little Help From My Friends was recorded at Noble Sound Studio in Germany, mostly as an ensemble, to capture the essence of the live performance. Together with Monteiro are Rudi Engel (double bass), Hong Chanutr Techatana-nan (drums), Tony Lakatos (saxophones), Jens Bunge (harmonica) and Eugene Pao (guitar). Other musicians lend their brass and vocals — Steve Lippia, Melissa Tham and Nick Zavior — to the collective effort.

The album is 10 years in the making, as Monteiro worked different combinations of tracks over time.

It comes across as soothing, inventive and thought-provoking as the melodies remain relevant yet are updated. The musicianship is top rate and has a wide spectrum of moods to keep the listener engaged.

Whip It UP! — Kimchi Beef Chilli

Earl Bamber — The Drive To Succeed With Porsche

The vocals, while delivered competently, could have benefited with a bit more loosening up. There’s an easygoing nature to the songs of the Beatles that are key to their success. That is not easy for artists to capture in the studio, and perhaps will come across in live performances.

“Fool On The Hill was the linchpin that kept nagging me to do this album,” he recalls. The other tracks eventually came together around that.

With so many Beatles’ tribute albums out there, one of the keys to ensuring a freshness to the album, was also to ensure it didn’t become contrived.

“It helps if you start off with you yourself meaning it, being sincere about it,” Monteiro reckons.

For those fortunate enough to get tickets, you can catch the sincerity at Jazz The Beatles, on July 12 and 13 at the Esplanade Recital Hall.

4 autographed copies of Jeremy Monteiro’s new album, With A Little Help From My Friends is up for grabs. Do like the article on STORM.SG and share it on your social media posts. Send us an email with a simple explanation for what the music of Jeremy Monteiro and the Beatles mean to you. Email it to thunder@storm.sg with the subject: Jazz Beatles.