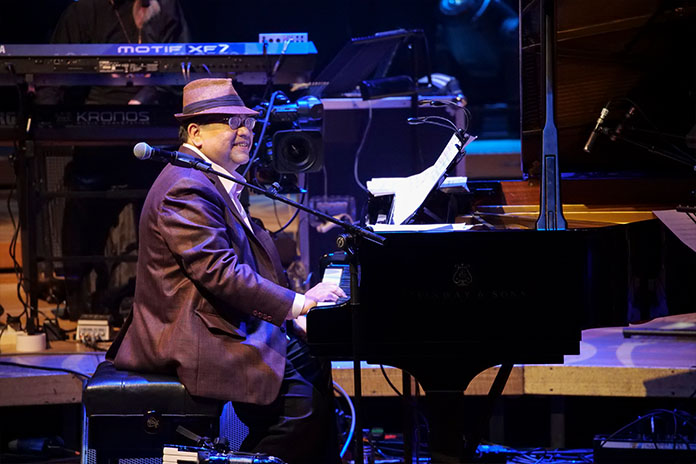 THE roots of modern jazz were founded on chamber music. The smoky dives and jazz clubs of New Orleans and Manhattan were locales where this genre was spawned and nurtured. It gradually garnered respectability, metamorphosing into the concert hall variety which casual listeners today know and appreciate.

Singapore’s “King of Swing” Jeremy Monteiro is familiar with both ends of this continuum, equally comfortable tinkling the ivories in Harry’s Bar as strutting the stage of Esplanade Concert Hall.

While one might be more familiar with jazz standards, essentially short works based on popular songs (the bread and butter of jazz pianists), Jeremy has also performed large-scale extended works. The prime example would be Montage (2010), a three-movement concerto for piano and large orchestra by local composer Kelly Tang dedicated to Jeremy on his 50th birthday, which has become the most performed Singaporean piano concerto thus far. 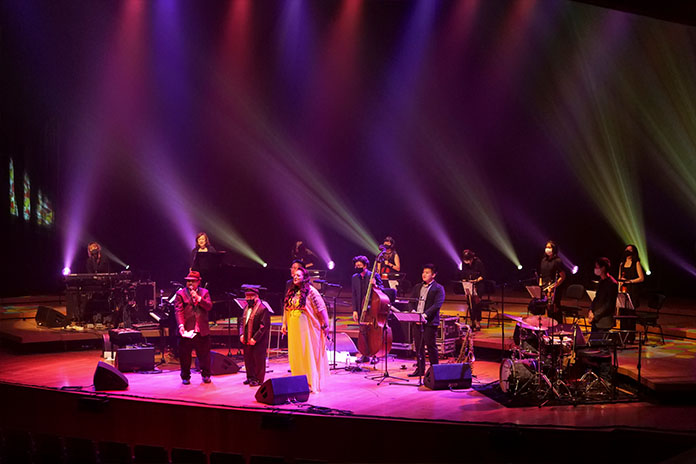 In this unique Covid concert attended by a socially distanced audience of 250 on 20 March 2021, Jeremy went back some way to jazz’s chamber roots. From the piano, he led a band of 11 musicians, and enjoyed the luxury of flute, sax, bass, drums, six violinists and electronics at his disposal.

The sonority they generated was far more than mere chamber music.

In many ways, this Jeremy Monteiro ensemble, despite onstage social distancing constraints, was symphonic in scope. 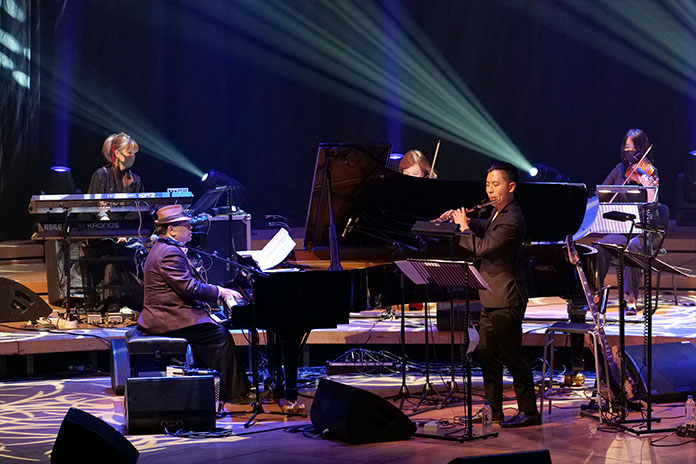 Opening with Orchard Road, co-written with Ernie Watts, this vision of Singaporean vibrancy and dynamism came in the form of a bustling symphonic poem. With extended solo improvisatory sequences for Rit Xu on flute and Sean Hong Wei on soprano saxophone, this was essentially an update of the baroque concerto grosso form, with a select group of soloists (the concertino) supported by a larger group of instruments (the ripieno).

The next two works were Jeremy’s unofficial scores for an Olympic Games anthem and a romantic movie soundtrack, if he were so commissioned. That was meant tongue-in-cheek, of course, but the pieces were as serious as compositions come albeit formalised on popular idioms. Olympia featured extemporations on the piano as only Jeremy knew how with solo spots for both violin and sax. Another Time, Another Place was a love theme that oozed passion and rapture, worthy of any Hollywood feature film. 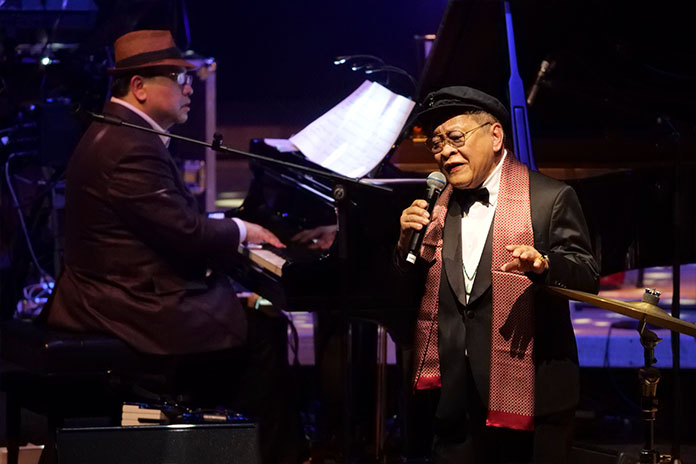 It was good to see Jeremy sharing the stage with two fellow Cultural Medallion recipients. Louis Soliano (CM 2018), despite his diminutive physical stature, possesses a mellow baritone voice, charming his way in Gershwin’s They Can’t Take That Away From Me and Trenet’s I Wish You Love, crooning insouciantly as he gently stroked the percussion. Even in these cameos, the 78-year-old, whom Jeremy regards as a mentor, is simply a giant of music. 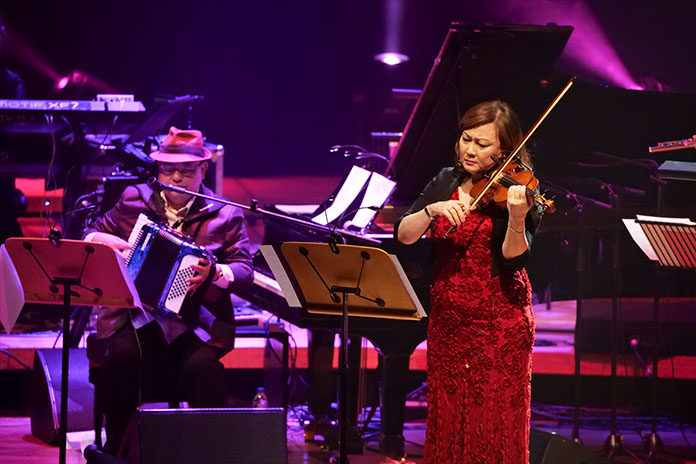 Former Singapore Symphony Co-Concertmaster Lynnette Seah (CM 2006), who had been in the background leading the violin ensemble from the Braddell Heights Symphony Orchestra, took the spotlight in Jeremy’s Alone In Paris. Accompanying her on accordion, this melancolic number shared a similar inspiration and bittersweet quality as Chopin’s Waltz in A minor (Op.34 No.2), besides being in the same key.

From Paris To Segré recounted a clearly enjoyable journey by train replete with a constant and hypnotic railway rhythm, aided by more flute solos. Then came Jeremy’s turn to exercise his vocal cords in Irving Gordon’s Unforgettable, better known as a Nat King Cole standard. As heartfelt as that was, it was upstaged by Josefina, a love song dedicated to his wife Josephine. If One People, One Nation, One Singapore represented Jeremy at his most public, then Josefina is his singular most personal and intimate number.

Jeremy’s final guest was jazz singer Alemay Fernandez who added a woman’s sultry vibes and Amazonian vocals to match her towering stature. In her Meant To Be, co-composed with pianist Chok Kerong, and Cy Coleman’s Witchcraft, she unleashed a passion that can only be described as breathtaking.

Closing the highly enjoyable evening, the encore heartily cheered on by the audience was another Jeremy classic, Helvetica. This catchy number which riffs upon the first nine notes of the Blues theme from Gershwin’s An American In Paris provided an upbeat end, with the melody lingering in the ears long after the concert.

Call it “Chamber Jazz”, but here was “Symphonic Jeremy Monteiro” in a nutshell. Shall we call this “Swingphonic”?

Photos: Ken Cheong courtesy of Esplanade – Theatres on the Bay