WILL we ever figure out China? How will we come to terms with artificial intelligence (AI), augmented reality (AR) and virtual reality (VR)? What is holding us back from progress?

These were some of the topics discussed at the recent Keep It Going series of discussions, organised by STORM.SG with Global Cultural Alliance.

The theme of this year’s event was Disruptors & Dinosaurs. What were the implications of being disrupted and how do you avoid becoming irrelevant?

The first part, The Thinking, brought together four panelists from different industries, who shared their perspectives with an audience of around 100 attendees at 10 Square.

Here are key talking points from the discussion.

“The future is both exciting and scary. There are megatrends we need to look at.

“When we were growing up, our parents said we should never talk to strangers. Now, we ride with strangers, We date strangers, soon we will be taken care of by strangers.” — Sheo Rai

“Some leaders don’t like to use social media. But the way the world is working, and the way you connect with employees on different platforms, social media is not just a need, but it’s going to be a basic requirement.

We help these leaders find social and emotional skill sets. At this time, empathy is required. People at the top are there to manage people. But there is a huge gap. They lack empathy.” — Preeti Dubey

“Many of the top CEOs are highly functional sociopaths. They have no empathy. After all, it was a battle for that ONE seat.

“It’s often their children or grandchildren who awaken their empathy gene. Women express empathy. Women leaders come up with ideas other than the bottom line.” — Dave Rogers

Can Singapore Disrupt Its Way Forward?

The Long And Short Of Azimuth Watches 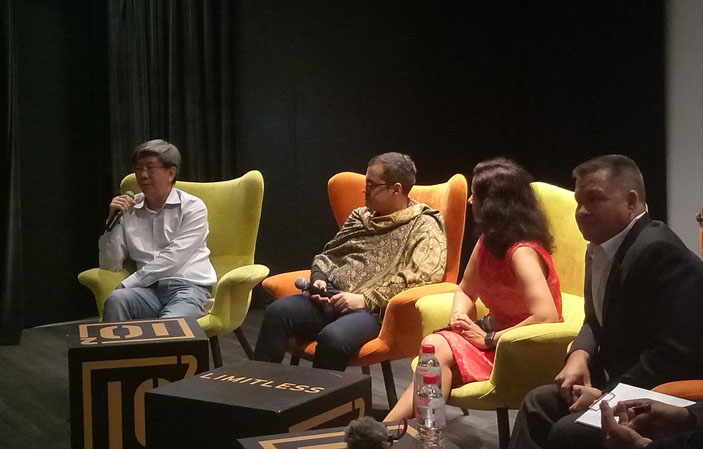 “Machines are the least empathetic things to have around, especially since they are designed by men. If they were designed by women, they would have some empathy built into them. Machines will have a role to play in the future. If it’s difficult, dangerous or monotonous, let the machine do it.

“With Virtual Reality (VR) you are immersed in an environment. Augmented Reality (AR) is a mix of VR and reality. But, would you want to walk around with this big thing on your head? Or put it on during a board meeting? In some situations, people still want to see eyeball to eyeball.

“Where AR and VR will become mainstream is likely in the entertainment space. It has some place in engineering, to visualise a place you are designing before it becomes real. And in the research space.

“There are plenty of caregivers around. People who have cared for their own family members. They are caregivers. Everyone is a caregiver and everyone, at one point of time, will be a care seeker.” — Sheo Rai

Anthony Wong of Creative Eateries is less concerned with technology than he is with China.

“When we talk about disruption, it’s technological things. But the biggest disruption in our world of business and our lives is China. I feel they are coming into my life. How far will China continue disrupting?”

His question resulted in a variety of responses from the panelists.

Go With The Flow

“My experience with China is they are disrupting business in a positive way. There are so many opportunities to collaborate and explore best practices. I believe China tends to look for best practices when they do business. I see the disruption as a flow. And you can be part of that flow.” — Dave Rogers

“China is big. For a small country like Singapore, we should be doing something different. It’s about user innovation. If you look at Steve Jobs, Airbnb and Uber, they are disruptors. But, they are few and far in between. Whereas there are a lot of users. As users we tend to forget that we actually have the power to make a difference. If something really irritates us, we should get out of our seats and do something about it.

The US has 323 million people. Of this, 6% are user innovators; 20 million people getting irritated by something and trying to make a better place by innovating to solve that problem. We all have a place to do that.

When you look at something, you may not disrupt, but then you can take that step to be a user innovator.” — Chinn Lim

“I remember years ago when China opened its market, it became the place that everyone wanted to invest in. I sat with private bankers and entrepreneurs and heard them talk about how each had a theory about how to go in and make the best of what China had to offer and make money. I said all of that doesn’t hold a cent because China closed its door to us. We knew nothing about what was going on, how they grew, how they thought, and then suddenly they came back on the world scene.

I don’t know if we have the survivor DNA. If we don’t have that DNA, how do you try to hold hands with China?” — Tina Lim Long, attendee

They were proud to do what they did. What is sad is when people are forced to collect cardboard boxes for a living. People must be allowed to age with dignity.” — P Jeyaretnam, attendee

“We have become more collaborative as a society, which is good. But, over the past few years, a lot of systems have been put in place that make us fearful of failure, and we dare not step out of our comfort zones and pigeonholeourselves to go for things that interest us, or are directly beneficial to us.” — Shane Yan, attendee