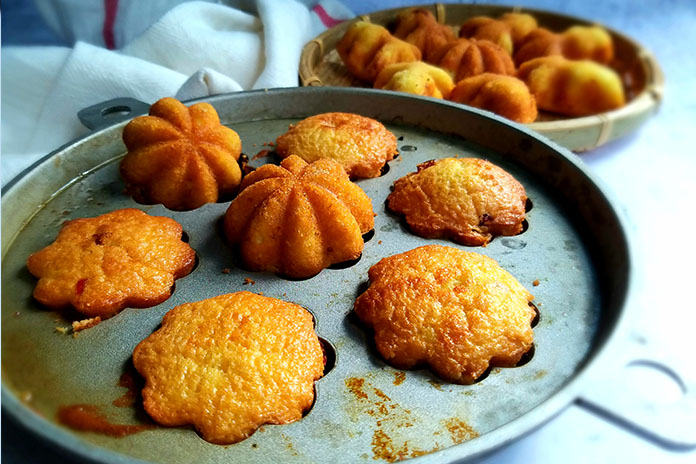 These kuih bahulu mini sponge cakes were popularly baked over charcoal using moulds of  different designs. Adeline gives these traditional cakes a fresh twist by adding chocolate chips and cranberries that appeal to the palates of the young. Bahulu is so popular that it is eaten as snacks throughout the year accompanied by a cup of local brew. 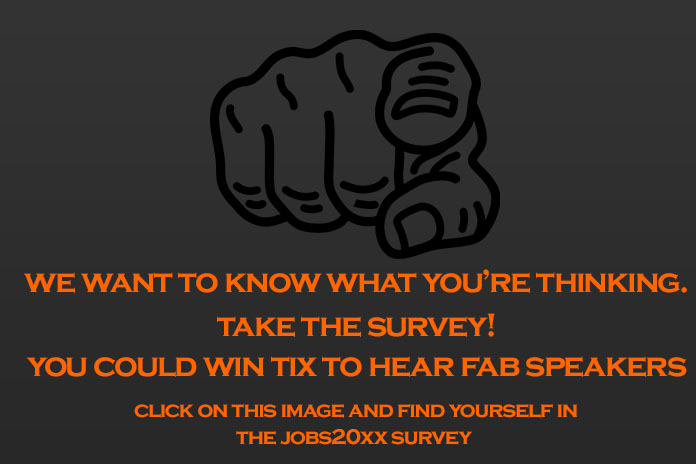 2. In a medium mixing bowl, whip eggs and sugar until it reaches ribbon stage* using a balloon whisk. Fold in flour and mix well.

3. Stir in cranberries after adding lemon zest and chocolate chips. 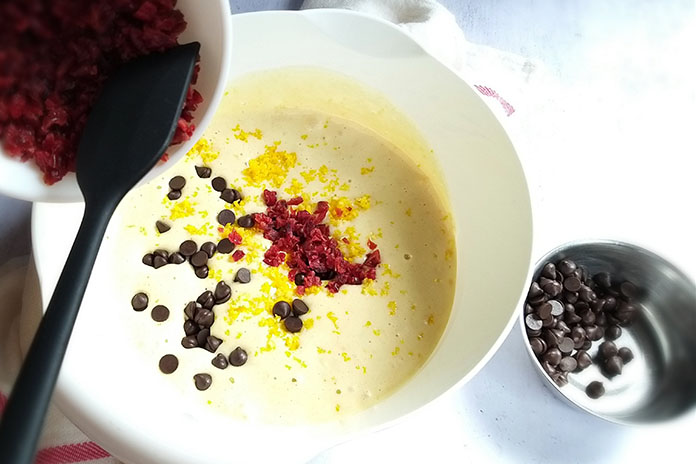 Using a spatula, stir batter until cranberries are blended in. 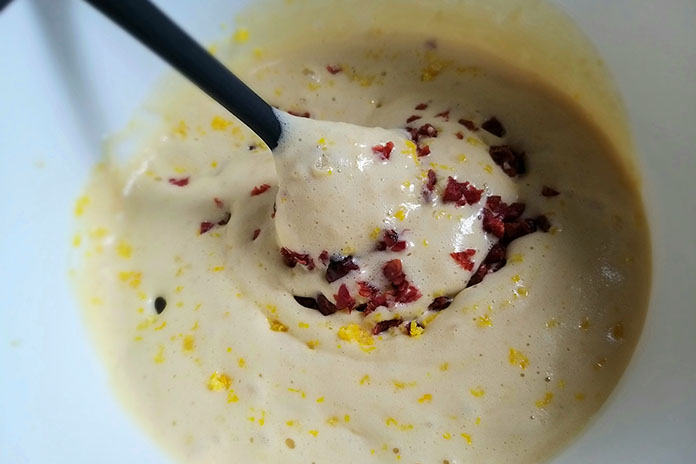 4. Using a pastry brush, grease bahulu moulds with some cooking oil. Place moulds in oven to heat them up for 5 minutes. Remove from oven and allow moulds to cool down slightly.

5. Using a tablespoon, fill each mould until 2/3 full with batter. 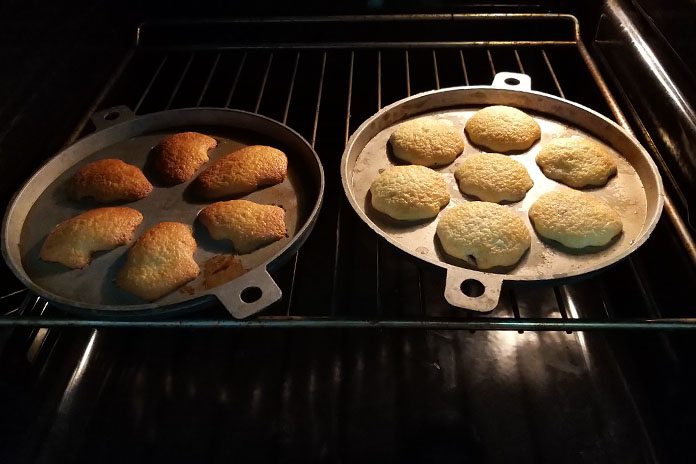 Using a tooth pick, gently prick each cake to lift it from the mould. Set them aside to cool down. 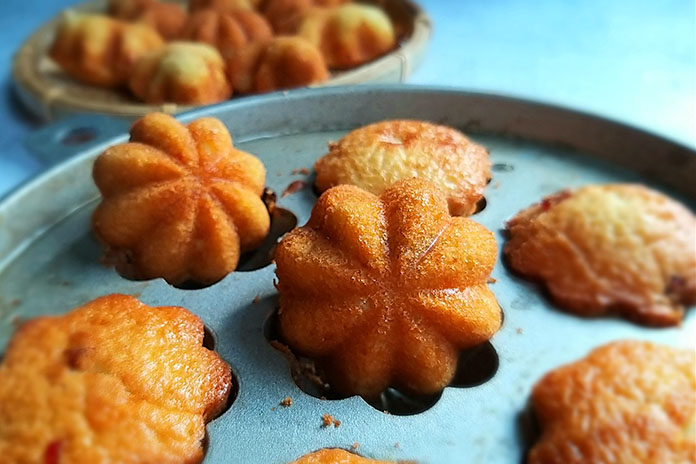 7. Grease mould each time before refilling with new batter. Repeat until batter is used up.

8. When cakes cool down, transfer them into an air-tight jars or tins. 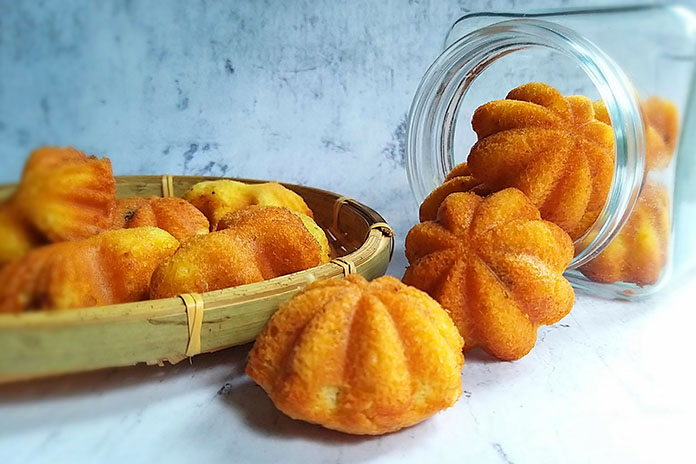 Note: This version is an adaptation of another STORM Asia recipe contributor, Shirley Ong Geok Mooi’s tried-and-tested recipe inherited from her grandmother which goes back 6 decades. It was the go-to recipe shared across Malaysia. It was easy to commit to memory: 1 rice bowl of plain flour, 1 rice bowl of granulated sugar and 1 rice bowl of eggs. 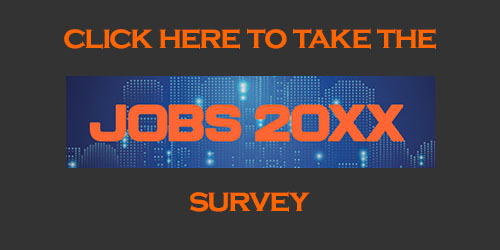 BUYING TIP: Moulds of varying sizes are made using copper, cast aluminium or vintage brass. The number of holes ranges from 6 (small) to 18. As these sponges were commonly baked over charcoal, moulds were often sold as a set comprising a cake mould and a lid on which charcoal embers were heaped to provide heatp on top. Opt for singular design moulds such as goldfish, mangosteen and rugby balls, which are more common. Alternatively, the assorted design mould has shell, floral, fish and leaf designs. While vintage brass moulds are the most heavy, they produce cakes with defined designs if well greased. Aluminium moulds, although lighter and cheaper, tarnish easily and require cleaning before using. To prepare them for baking, mothers would combine pineapple peel and “eyes” with water in a food processor and pulse until fine. This mixture would be poured into moulds, left to stand overnight and rinsed before baking. Natural citric and ascorbic acids strips the tarnish.

*TECHNIQUE: When whisking eggs with sugar, keep doing it until mixture becomes creamy and turns pale and silky. During whisking, air is being incorporated that will yield puffy pillows of cakes after baking. To find out if batter has reached ribbon stage lift whisk above mixture and watch how the batter falls into the mixing bowl. If it falls like a ribbon, then it is ready to add flour.

Click on Storm-asia.com/category/food for more recipes and reviews of restaurants.

See also  Soto Ayam With Bergedel — Whip It UP!