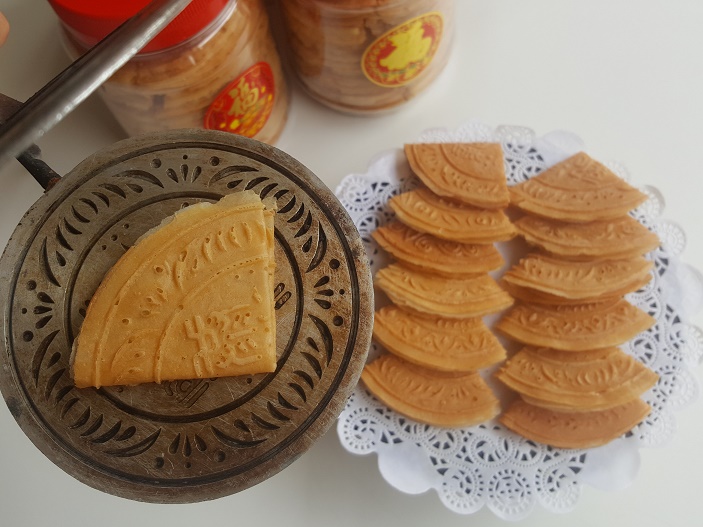 Love letters are a labour of love. And a perfect way to show just how much you care for Valentine’s Day, which is just around the corner.

As it’s still the Chinese New Year (CNY), gather family or friends to bake a batch for Chap Goh Meh (the 15th day of CNY regarded as the Chinese Valentine’s Day, which falls on 19 February) – many hands make light work!

Traditionally, each piece is manually cooked individually over charcoal fire, making it a sweaty and laborious affair. It needn’t be. Here’s an alternative – bake them in a toaster oven, a tried-and-tested-cooking method developed by Khwan Choo’s son-in-law Ginger Lim.

1. In a mixing bowl, beat eggs with a fork. Set it aside. In another mixing bowl, combine flour and sugar. Pour in eggs. Using a whisk, beat in one direction until both mixtures are well combined.

3. Using a sieve, strain batter into a clean mixing bowl to remove any lumps. This is a critical step to get a smooth batter so that each love letter cooks and browns evenly. Set it aside.

4. Switch on toaster oven to the highest temperature – this is equivalent to 180C in a convection oven. Put empty love letter moulds inside oven. Heat up for 15-20 minutes. Keep oven door open at all times throughout baking process. 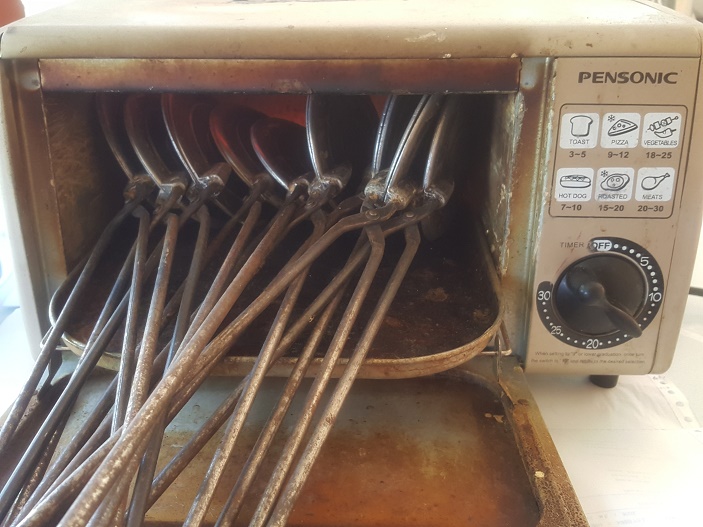 5. Remove moulds, open them up. Spray cooking oil on both halves of mould. Return them to the oven and heat up another 2 minutes – this is to ensure mould is hot enough to initiate the cooking process.

6. Baking love letters: Using a large slotted spoon, pour batter onto 1 side of mould to coat its entire surface. 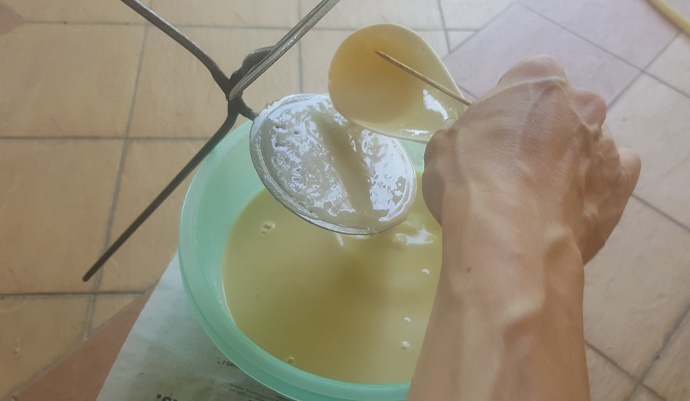 When the batter touches the hot mould, it will sizzle. 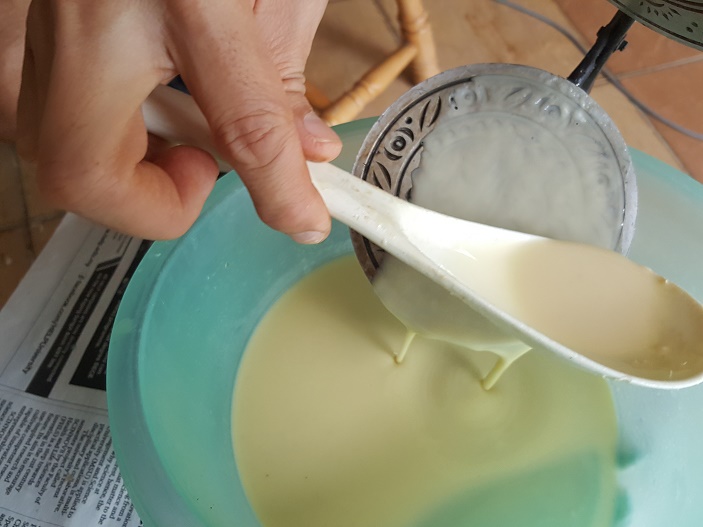 Close mould. Place it back inside the oven toaster vertically.

7. Cook for 3-5 minutes. Take out the mould; using a butter knife, scrape off any excess batter from the sides of the mould before opening it.

8. When cooked, love letter is wafer thin and turns golden brown. Swiftly peel it off using a butter knife or with your fingers.

9. Fold each love letter into half. 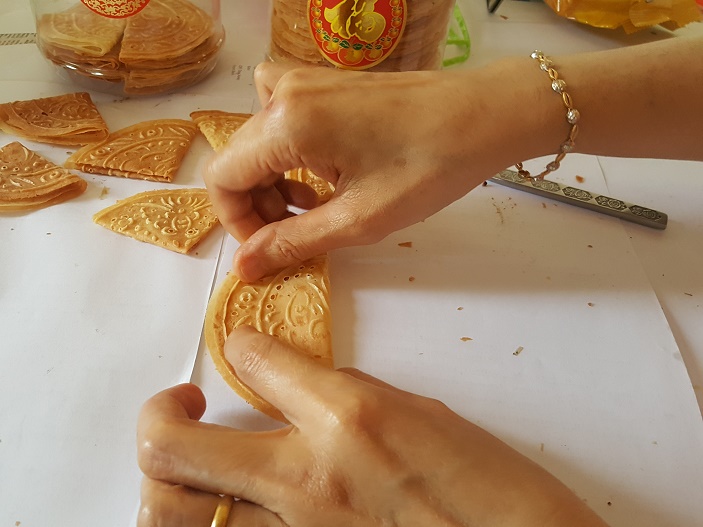 Next, fold a 2nd time into quarters. It will resemble a triangle. Work quickly. 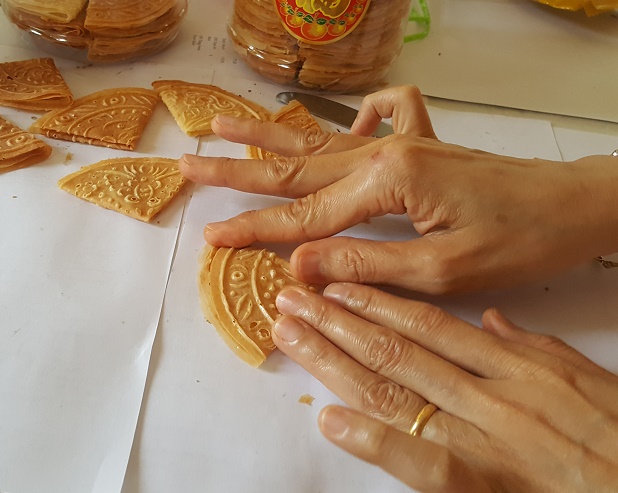 As it cools down, the love letter will harden and will break easily. At this stage, it is very fragile, so handle every cooked wafer very gently.  See technique.

10. As soon as wafers cool down, store them in air-tight tins or plastic tubs. 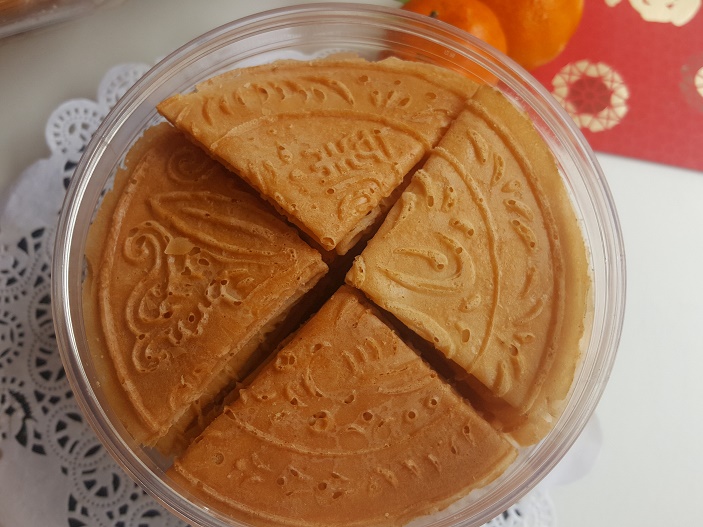 11. Repeat cooking process until batter is finished up.

TIP: Store love letters in air-tight tins to keep them crisp for up to 2 weeks.

TECHNIQUE: Using your fingers and then the flat side of a butter knife, press gently along the folds and on tip of triangle to flatten each love letter. This makes it easier to stack when storing them in tins or airtight containers.

Here is a video of the process.

Hainanese Chicken Rice – Whip It UP!

Grilled Lobster With Asian Soy Dressing — Whip It UP!