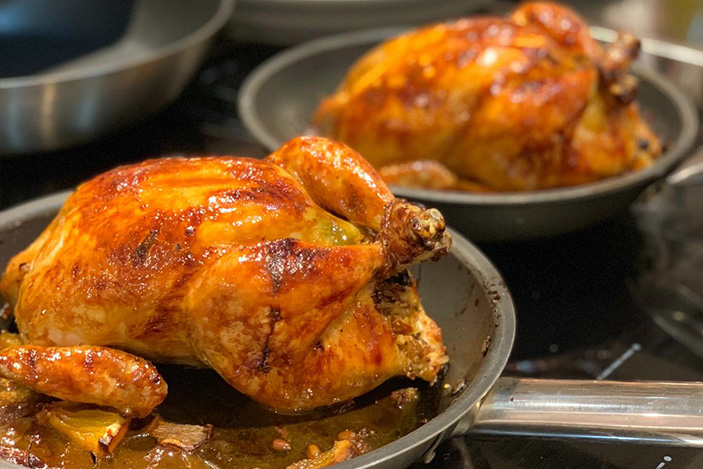 Orange-glazed Roast Chicken with Brown Rice and Quinoa Stuffing – Whip It UP!

There is always room for one more roast chook recipe!

This one is brilliant with a lovely, nutty stuffing and lots of fresh oranges. If kumquats are in season, do toss some into the dish, says Celebrity Chef Audra Morrice of MasterChef fame.

This recipe is from her new cookbook, Cook & Feast, a collection of over 100 easy-to-follow recipes spanning the Asian and Western cuisines that are enjoyable to prepare and serve. This kitchen companion provides practical tips, techniques and ideas for home entertaining.

Audra’s eclectic cooking style is very much influenced by her Chinese-Indian heritage, where communal dining is at the very heart of Asian culture.

1.  To brine chicken, fill a glass bowl large enough to fit the bird in water; add 1 tablespoon of salt. Stir to dissolve. Submerge chicken in water, cover with cling film and refrigerate overnight.

2.  Remove chicken from brine, drain well and pat dry with paper towels. Lightly salt and rub 1 tablespoon of oil all over chicken. Set aside. Preheat your oven to 180°C.

3. Place ingredients for glaze into a small saucepan and bring to the boil. Cook until thick and syrupy. Set aside to cool.

4. To bake, prepare a baking dish slightly larger than the chicken. Toss together onion, garlic, orange slices and cinnamon stick with olive oil and place them at the bottom of the baking dish.

5. For stuffing, toss together all ingredients. Gently spoon stuffing into the cavity of the chicken, making sure not to stuff it too full or to compress it too much. Lift up bird by its legs and give it a shake to settle the stuffing. Close cavity with flaps of skin at the mouth of its cavity. 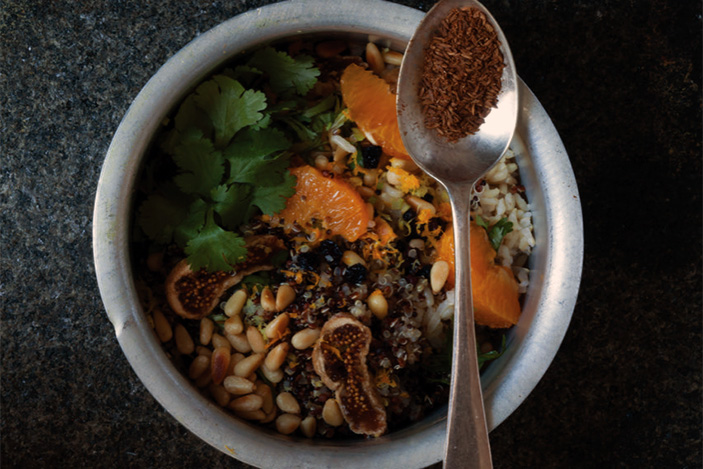 6. Place chicken on top of aromatics and bake in the oven for 1 hour 35 minutes. In the last 20 minutes of cooking, baste the chicken with the glaze every 5 minutes, pouring the remaining glaze over the chicken in the last 5 minutes. You’ll find that the first baste does not really stick but it will improve from the second basting. 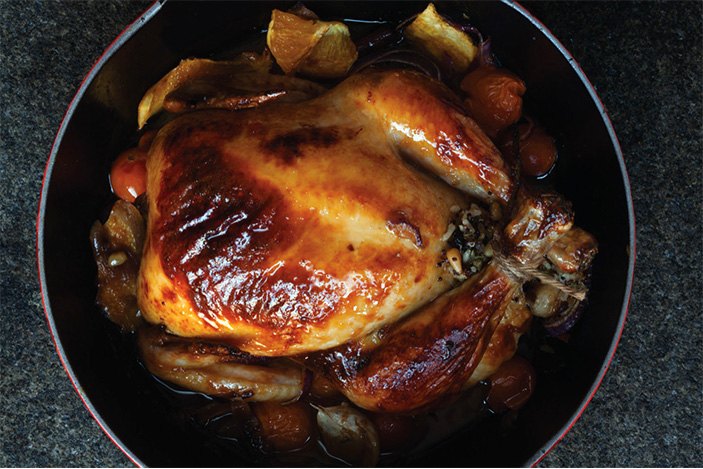 Remove from the oven and rest before serving.

*BUYING TIPS:  Look for preserved Turkish figs (picture below left) which are larger with a moist succulent centre. They are used in cooking or baking in Middle Eastern dishes. Chinese white dried figs (below right) are similar to its Iranian counterpart but are smaller and drier. The dried Chinese figs are usually used for cooking soups to nourish the lungs and treat coughs. 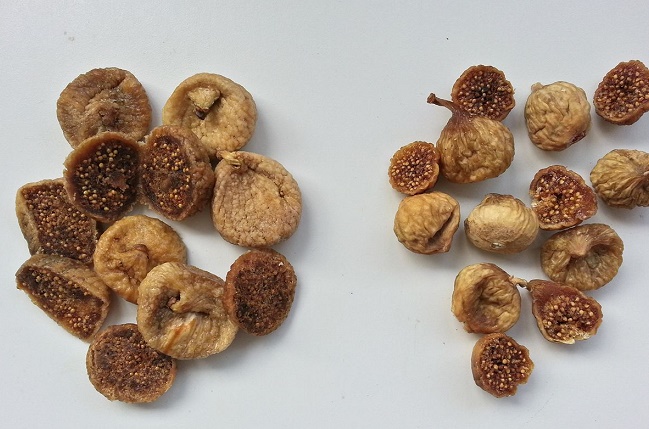 Indian red onions are also suitable for this recipe – they’re generally used for cooking curries and are easily available at major supermarkets and wet markets. 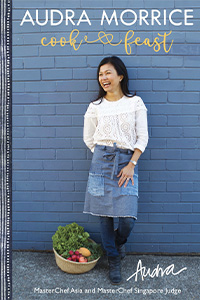 Audra Morrice left the corporate world of telecommunications to nurture her food passion. An author of 2 cookbooks (including her first book, My Kitchen, Your Table), she runs her own catering business. Audra is also a TV presenter of a cooking show, an instructor of cooking classes and programmes in Singapore and Sydney, Australia where she lives with her family. She was a finalist in MasterChef 2012 Australian edition, a judge in MasterChef Asia 2015 as well as the head judge in the Singapore edition.

Butternut Squash &#038; Cauliflower Soup with Rosemary – Whip It UP!

Apple Rosette Tartlets With Gula Melaka – Whip It UP!