THE PERANAKAN food vultures were quick to descend on the dining table at Jeffrey Chia’s five-room executive flat.

In short time — about an hour — the table was all but picked clean. Not that Chia minded.

The slim, bespectacled civil engineer turned chef is all smiles as the laden table is swiftly cleared of his delectable creations.

Chia is part of a growing breed of food operator who sets up his business in his home. It saves on rental and other prohibitive costs, and provided your neighbours do not complain and your food is good, it’s more than decent.

Their reputation is often spread by word of mouth recommendation, and obviously, the word is quite strong in Chia’s case.

“In the four and a half months I’ve been operating, I’ve had 800 people dining here,” he says as he serves up a regular flow of fragrant and tasty Peranakan dishes. This fare often from Penang and Malacca is famous for its cross-cultural influences, something we seem to be lacking in society these days.

KF Seetoh of Makansutra fame first wrote about Chia’s Nonya Bong The Peranakan home dining venture. The response has been overwhelming and you have to book a month ahead for a seat at the table.

It’s worth the wait, and Seetoh, who led this ravenous group to Chia’s Chua Chu Kang apartment, didn’t have to whip up any fervour for homemade Peranakan food. The walls of Chia’s flat are lined with silverware, books, photographs and a variety of bric-a-brac. But all eyes are on the table with its Peranakan motif in the form of a floral runner. 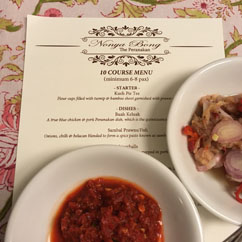 Nothing fancy or over the top, as Chia, in a tee shirt decants the wine that the guests have brought. He is chatty without dominating and is forthcoming about his recipes.

The focal point — the dining table — is within view of the well-lit kitchen, which is glassed off, but by the time dinner is ready, it’s more a staging area for the dishes that will be served by a kebaya-clad server and Chia.

Waves Of Umami At Nami

A self-taught chef, Chia picked up his culinary abilities from his late mother. The emphasis was always on doing everything from scratch, which means he started preparing for the meal at 8.30 in the morning.

It’s a regular rhythm, now as he does this about four or five times a week, sometimes twice a day.

First out are plates of chilli and chinchalok and a small container of thick buah keluak gravy. Chia says that about 20 buah keluak nuts are used to make the gravy. We find out later that just combining this and the chilli with the white rice is a tasty meal in itself.

The prelude to the feast is comprised of rows of kueh pie tee (top picture), lined up in impressive fashion. They don’t stand a chance as the vultures swoop in. Stuff each piece into your mouth and let the biscuity shell crunch and mix in with the just-moist filling and the chilli which looks hot, but is not overwhelming.

Chia says he experimented with close to 10 recipes before settling on the recipe for the shell.

Next up are the liver balls. Not readily found, these delectable morsels of pork and liver are wrapped in pork caul. Add some chilli and the end result is an explosion of flavours in your mouth.

From here on, it’s a steady flow of dishes to accompany the rice.

The rich gravy of the buah keluak has generous portions of chicken and pork. The taste is subtle, as Chia exercises a restraining hand, especially when it comes to salt.

The beef rendang, which took the longest time to prepare, is tender, with a thick gravy to accompany it. The sambal hati — a mix of chicken gizzard, liver and prawns is cooked with lemongrass and herbs.


The Curry Kapitan was one of the highlights. Delicious and with tender chicken pieces, it brought a lot of lip-smacking nods of approval from the vultures.

The wing bean kerabu, which followed, proved outstanding for its refreshing flavours and crunchy bite from the texture of the vegetables and the tart dressing.

Dessert was a big wobbly white boob that seemed like it was many sizes too large. The sago pudding with gula Melaka provided an ideal sweet ending to an outstanding 10-course meal that cost $65 per head.

There’s a minimum quantity of six pax, up to twice that per meal. But there’s always the option to take away or have dishes delivered.