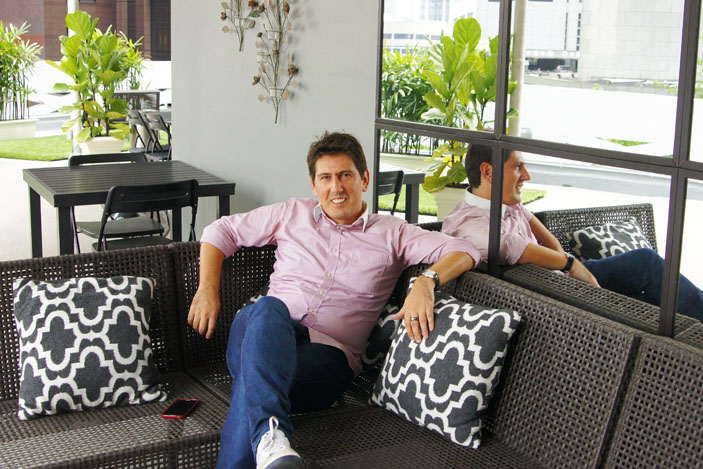 THE DIGITAL crowd is changing the landscape across industries.

The Smithsonian Institution, Lego and Hollywood filmmaker Spike Lee are some of the noted names that have jumped on the crowdsourcing wagon as means to very different ends.

They are using the Internet to reach out to vast numbers of people to involve like-minded fans in their passions. Founder and CEO of Crowdsourcing Week, Epi Ludvik Nekaj, observes that “social media has turned into social productivity”.

“Lego is a company that heavily relies on invention and it has reinvented how it innovates — the ideas no longer start from the lab,” comments Nekaj, who moved to the US from Kosovo as a child. He had an advertising company in New York city before coming to Singapore because of the potential to be had. “Asia is an untapped market in the crowd-related economy. North America is the leader, Europe is second and Australia/New Zealand lies third. We are talking about crowds, and this is where they are, in Asia.”

Lego CUUSOO is a digital platform that allows anyone anywhere with a computer to create new designs using the company’s existing plastic building bricks.

Designs that get at least 10,000 supporters, including people who say they would buy it, are shortlisted for production. This voting also gives Lego a good idea that these will sell if made. The creator of a design that makes it to market gets 1% of net sales globally.

The National Archives and Records Administration (NARA) and the Smithsonian, both in Washington D.C., are crowdsourcing historical knowledge with great success. At NARA’s transcription pilot project launched in 2012, it led to an anonymous user contributing a letter from Winston Churchill to Franklin Roosevelt. The Smithsonian has given the public access to more than 4,000 pieces and has some 3,000 digital volunteers on its transcription platform. No one gets paid here, but history buffs love it and the projects are expanding.

US filmmaker Spike Lee, of Malcolm X fame, reached to the crowds to help fund his next film. He reached US$1.41million four days ahead of his US$1.25 million deadline in February using crowdfunding site Kickstarter. Since its inception in 2009, more than five million people have helped fund over 50,000 creative projects of mostly independent filmmakers. Lee used Kickstarter to ask people to pledge money to make his next movie, Da’ Sweet Blood Of Jesus, a romantic horror comedy that is “funny, sexy and bloody”.


He called the fund-raising campaign “The Newest Hottest Spike Lee Joint.” Donors received a range of memorabilia such as autographed bumper stickers for US$5 pledges, T-shirts for $30, and two tickets to the world premiere of the movie in NYC for $250. People who give US$10,000, as did fellow filmmaker Steven Soderbergh, will watch the New York Knicks play baseball sitting next to Lee in the best front row seat at Madison Square Garden.

Other films that have also benefitted from crowdsourcing are Veronica Mars, based on the TV series, which raised US$5.7 million, and Zach Braff’s Wish I Was Here (the follow up to Garden State), which brought in US$3.1 million.

Consumer goods giant Procter & Gamble (P&G) through its Connect + Develop project,  has made 2,000 successful innovation agreements around the world with this open strategy.

The company that has 300 brands in 180 countries historically innovated internally and seldom licensed their own capabilities and technological know-how to other companies. But it now embraces what it calls open innovation because “times have changed, and the world is more connected”. Some of the products that have been invented, developed and brought to market through partnering far and wide and sharing of ideas and technology are a Cover Girl mascara, Crest teeth whitening strips and the Swiffer duster.

Nekaj reckons crowdsourcing has reinvented the hospitality industry. Anyone with a computer and a home to let could make money. “This is empowering the public.

“With Airbnb the crowd is the company. It has totally broken the old corporate structure where the top makes the money.” Airbnb, as in air bed-and-breakfast, charges a fee to renter and guest; the renter earns an income and the guest has a cozy option other than a hotel.

Since Airbnb began in San Francisco in 2008, some 8.5 million guests have stayed in houseboats, tree houses, castles, private islands and regular homes. It boasts half a million listings in more than 34,000 cities in 192 countries.

Nekaj calls himself a crowdsourcing “evangelist”. To this end, he is offering his second annual Crowdsourcing Week Global from April 7 to 11 at the Genexis Theatre at Fusionopolis. He is expecting about 600 people from 40 countries to attend. This year he will have small and medium sized enterprises (SMEs) as well as top management and decision makers from businesses and government.

Crowdsourcing Week also runs one-day summits around the world focusing on topics that are relevant to local markets. For example, the next summit that will be in Brussels in June will be on crowdfunding, healthcare and open innovation.

Last year, these summits were held in Europe, and this year, Nekaj says, he wants his footprint to cover all continents and is going to be in 11 cities — from Shanghai to Nairobi to Budapest.

And the future he feels is limitless. “This is a new landscape,” says Nekaj. First, the Internet population is going to double in the next seven to 10 years. Second, it will be used differently. Presently, most of the two-and-a-half billion people on the Internet use it for searching, sharing, shopping and sending email.

“This has nothing to do with social productivity. The next stage I see is where this Internet of download becomes an Internet of upload. Millions of people will showcase their expertise and inventions and make money doing so. Governments will use it to get critical information on what its citizens want and will be able to provide and divert services on-the-go, for example, to move traffic quickly when congestion builds up.

“Crowdsourcing will be the new cloud computing. There are no geographical barriers. Someone in the Philippines or Indonesia may be able to earn money if he has a good design.”

STORM readrs get discounted prices to participate in Crowdsourcing Week Global from April 7 to 11 at the Genexis Theatre at Fusionopolis.

How To Help Those In Need