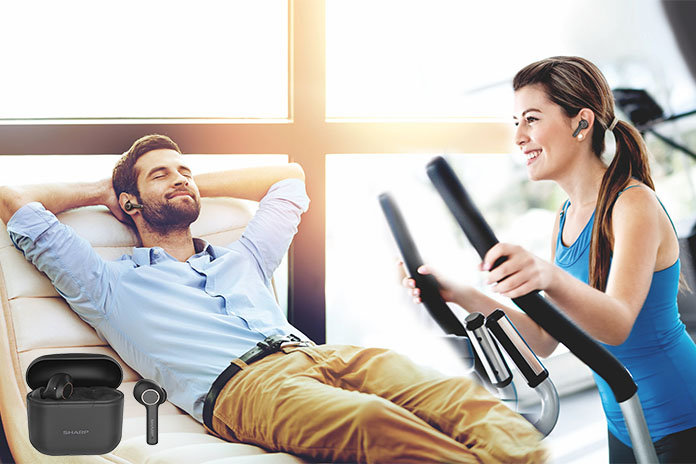 THE Sharp brand is known for developing many products in more than a century of doing business.

From its mechanical pencils, which started the brand, to radios, televisions, air purifiers, health products and anything electrical, the Osaka-based brand has been game to have a go.

Since its business reform in 2017, the brand has been responding to changes and is adopting the 8K+5G and AIoT approach to the future.

This is an alpha-numeric concoction by electronics contract manufacturer Foxconn, which has a majority stake in Sharp Corporation and serves as its business vision — using 8K ultra-high-definition technologies, 5G technologies and a combination of artificial intelligence and the internet of things (AIoT).

Round about the time of the business reform, Sharp introduced earbuds to their wide product range. Keen on capturing a slice of the mobile market, there were many chasing cheap options and better quality products. Sharp opted to pursue the latter.

The latest updates of the Sharp earbuds come in just black here and two variants. There are white and gold versions if you look online, but basic black it is for this market.

The higher-specced HP-TW30 and the HP-TW10 are wireless, sweat-proof (IPX4), have wireless charging, take 3.5 hours to fully charge, and run for up to 6 hours of binge watching/listening with another 18 hours in the case.

The TW30 has active noise cancelling for when you want to reduce the external sounds, for which you pay S$50 more ($249, though there are already discounts available on some shopping platforms).

The TW30 tested in this review comes in a largish case, due to the form factor of the earbuds that have shoots popping out for the mic. You aren’t likely to use them much, except maybe to activate Siri or some other voice command. Talking to anyone on the phone makes you sound like you’re submerged.

But once you have them in your ears, the sound is quite good.

While the soundstage is fairly compact, buzzing around your head, the definition is remarkably clear across different genres of music.

The bass has the right amount of thump without sounding artificial. Nigel Stanford’s Entropy has a spreading bass moment that is well captured with the Sharps. And Pig & Dan’s build up in Sirenism sustains your interest.

There’s great presence for Steve Gadd’s drumming on Steely Dan’s Aja. It’s wonderful to immerse myself in Richie Blackmore’s flying guitar work in Child In Time from the 1970’s recording Made In Japan, which was recorded in Sharp’s hometown, Osaka.

And Kim Yuna’s clear vocals gently fill the senses on The Road, the original TV soundtrack for Signal.

Listening Out For The Competition

There are many brands playing in the $200-$250 price band, and many with reputations that precede the actual product, and for good reason.

If you’re an Apple user, their AirPods smartly switch between devices and pauses when you pop it out of your ear.

Not so for the Sharp, which zeros in on one Bluetooth pairing and has to be delinked before connecting to another device.

So, chances are you’ll stick to the one device. But while you have the Sharps in your ears, you’ll appreciate the ease of operation and the comfort level.

And while you’re at it, you may want to read more about Sharp’s history. It’s a fascinating tale of resilience and determination. Let’s see where this audio trail takes us.