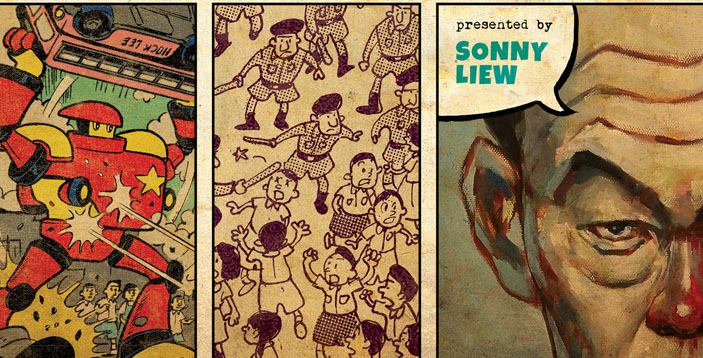 WE HAVE what it takes for Singaporeans to make it on the global stage on their own steam.

Joseph Schooling did it, winning gold at the Olympics.

And now Sonny Liew has done it, bagging three Eisner Awards over the weekend for his graphic novel, The Art Of Charlie Chan Hock Chye.

One thing to note is both were achieved on their own dime. Schooling’s parents magnanimously funded his effort as the nation cheered, shamelessly.

The National Arts Council (NAC) may try and squeeze some credit for initially acknowledging Liew’s talent. It had, after all, offered an $8,000 grant for Liew’s winning experimental graphic novel, which weaves fiction into fact about Singapore’s history.

The grant was withdrawn at the last minute when NAC balked at the contents which sent a shiver up and down the spine of the establishment, leaving publisher Epigram in the lurch.

But it looks like Liew and Epigram are having the last laugh now.

The graphic novel picked up the Best Writer/Artist award for Liew, as well as Best US Edition of International Material—Asia and Best Publication Design. Liew, who has done work for Marvel and DC Comics, was nominated for six awards this year.

Role Of Government In Culture

While The Art Of Charlie Chan Hock Chye won big for Liew and his adoptive nation, will Singapore be big enough to accept this?

With the Internet opening the world to Singapore, and vice versa, it’s time for the local institutions to forego provincial thinking when it comes to deciding what audiences want to see and appreciate.

The government should not play the role of art critic.

But since it is using public funds to administer the nation’s arts programmes, it should be more forthcoming about who chooses these programmes, and how they are chosen, with the interests of the general public in mind.

This may encourage debate and offer perspectives that would widen the public’s appreciation and understanding of how culture is able to serve as a guide to moulding the future of Singapore.

It’s only by reflection and critique (not complaining and withholding) that we can grow and learn to step up meaningfully in the world.

If we claim to be a first world nation, then we should start to think, behave and act like one.