THE FUTURE is uncertain. But we still have to eat.

Two companies related to the food and beverage business have taken on the incumbents to develop business models that they hope will put them on the map.

Instead of following the obvious path, The Golden Duck and Café Karung Guni have taken bold steps to discover new opportunities. The benefit of heading down the road less travelled is that there are fewer competitors to get around.

We talk to Jonathan Shen of The Golden Duck and Dawn Lim of Café Karung Guni about their stories and get some insightful tips that might be useful when the Singapore budget is announced.

Dawn Lim looks out of place in the industrial building. In her demure black dress, she stands out against the utilitarian products that were once part of the dreams and hopes of various food and beverage (F&B) businesses.

As we wade into uncertain times, it’s not surprising that taxis and restaurants are continuing to open up opportunities for those in search of a livelihood.

Although on the surface the F&B scene appears to be flourishing, the rate of closures is equalled due to high overheads and manpower shortage in a highly competitive landscape. Café Karung Guni, owned by previous F&B business owner Dawn Lim, has spotted an opportunity in these changing times. Rather than be at the frontline and take all the risks, she opted to think differently and enter behind the scenes.

It began when Lim set up Nook D.I.Y. House of Pancakes at the age of 23. Passionate about food and the business-aspect of restaurants, she took a stab at it as a complete greenhorn.

“Most youngsters dream of becoming a business owner, and I was no different,” Lim said.

“I went into the industry at the peak of the brunch craze in 2012, where patrons were paying over $20 at places like Wild Honey. It was my efforts to create an intriguing café concept, but I soon realised equipment recycling could be more feasible.”

After spending six months visiting restaurants around Singapore, analysing menus and studying operations, she found a gap in the market, which was not as glamorous, but steadier.

“Retaining customers is a constant struggle because every F&B outlet strategises promotions, new food items, and location expansion. A successful business is not contingent on a sole element, and a large majority of businesses fail, rendering equipment to waste while still in very usable condition,” Lim said.

Café Karung Guni fulfils F&B needs in the highly volatile landscape. It takes in equipment from failed businesses and sells it to the next wave having a go at it. The newcomers can save as much as 50% of the cost of buying new equipment when they pick up secondhand equipment from Cafe Karung Guni.

This business proved fruitful and Lim sold off Nook Café.

“I had to make a decision. Recycling is a universal need and I saw a scalable market for equipment recycling. I noticed the boom of young people in the café scene, and predicted the downfall of cafes in the saturated market,” Lim said.

She faced difficulty convincing customers in the early stages, due to a lack of expertise. Lim fixed this with a hands-on approach from the beginning, such as visiting warehouses, learning from chefs about equipment price points, taking part in logistics discussions, getting on lorries to move goods, and speaking to operators to understand every step of the process.

“After a while I gained the technical language,” Lim said.

“It takes persistence and courage for women to dare and venture into a business like this, and I made sure I was open-minded enough to embrace every change.”

What originated as a spark has grown into something useful for the majority of F&B operators, from the big players to small individual outlets. One by one, big players in the market were convinced to buy and sell from Café Karung Guni.

Currently, Lim works with 60% of F&B outlets in Singapore.

“That’s when you know you have something essential for the market,” Lim said.

“Business is about solving people’s problems, something I am proud to have established by being part of a constant learning experience.”

FIVE Things To Consider When Finding Your USP

1. Study the mundane
I like to pick mundane and dull industries that have lacked progression for years, and reinvent a service that is better and at a much better price.

2. Forward thinking
Knowing how the market is changing and spotting the trend ahead of others is crucial to success. Always study the market, and realise change before you are forced to adapt to it.

3. Follow your passion
It has been repeated tirelessly, but it really is important for you to follow where your passion lies. Find the right role in business, one that suits your temperament, and use your key skills to excel in it.

4. Keep an eye out for opportunity
The bigger a company is, the more it struggles to innovate. It is good to start off from the bottom or in smaller companies so you have more leeway for innovation. The pioneer might not have the best product. For example, Friendster had a great concept, as did MySpace. But Mark Zuckerburg had a better business model with Facebook.

5. Take a leap
Don’t be afraid. Be willing to depart from the norm despite how daunting it may be. Do not be wary to step away from the norm, just because everyone else is doing it.

The popularity of salted egg yolk in Singapore lies in its capacity to be integrated into almost any dish with truly delicious results. A golden trail has been made ranging from steamed buns, croissants, pasta, macarons, ice-cream, and fried snacks. The long-term potential of this unique flavour has caught the attention of many businesses, but to establish a brand identity around a single product is not a simple task.

The Golden Duck gents are not chasing applause. They’re rearing to take on the spotlight. Producing a signature blend of this heritage flavour with a modern rendition, they have become Singapore’s number one purveyor of salted egg snacks in under two years.

Specialising in salted egg yolk flavoured potato chips, and recently branching out to fish skins, their products are currently sold in eight privately-run concept stores and they have eight retail partners since inception in 2015. In this short time, they’ve also caught the attention of retail giants 7-eleven, which carries their snacks in 400 stores island-wide. 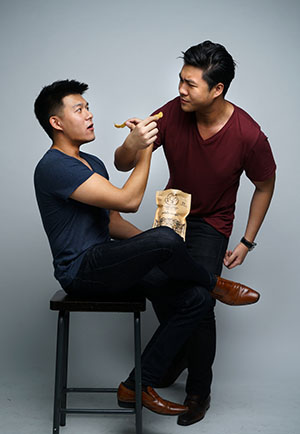 Jonathan Shen and Chris Hwang, founders of The Golden Duck, made conscious efforts to be brand-centric in everything they did from the get go.

“You also need a good brand story that consumers can get behind. That’s how we’ve turned a single product into a brand that’s about to go international.”

It helps that Singapore being a nation of foodies would jump at the opportunity to see a local flavour packaged for quick consumption.

The Golden Duck has received overwhelming positive reviews. But the founders remain certain that their already established success is just the tip of the iceberg.

“For us, the goal has always been to expand outside the comforts of Singapore,” Hwang said. “We believe that this company has the potential to make a mark on the international snacks scene and we’re laser focused on getting there.

“Once you’ve got a goal and belief, direction becomes a whole lot clearer.”

FIVE Things To Focus on When Building Brand Identity

1. Planning
Decide who your customers are.

2. Understanding
Get to know what makes your target customers tick.

5. Engaging
Once you’ve got a following of brand loyalists, keep them excited. Making sure your consumers are engaged is one of the most important things to do as a brand. Fail to do so and risk losing relevance.