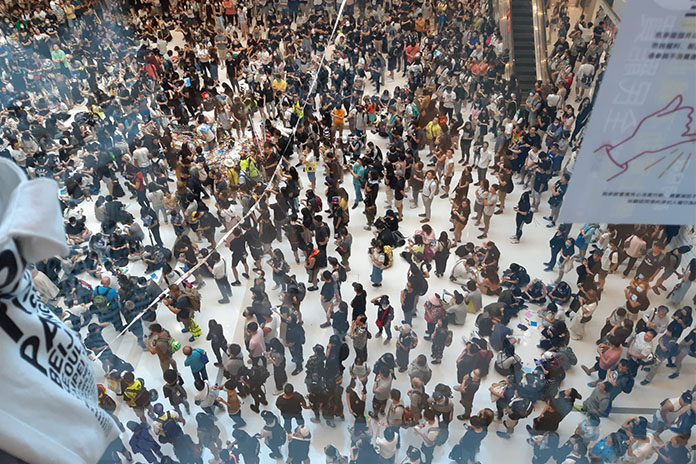 THE SITUATION in Hong Kong has dragged on much longer than most people expected or wanted.

Demonstrations over the weekends have stretched on for 15 weeks with no sign that it will be over anytime soon.

Hong Kong’s unique situation — One Country, Two System political experiment — and the fact that it will be handed over to China in 2047 leaves many wondering as to why the demonstrations have been taking place and what significant point is being made.

Business owners are unhappy with having to shutter their businesses, tourists numbers are declining, conventions are being shifted to other countries (Singapore is a beneficiary) and trust in the system is wearing thin.

What started out as a march against an extradition bill escalated into violence and disruptions and destruction of public facilities.

The issues are yet unresolved, but what will these demonstrations do for the future of Hong Kong?

STORM-ASIA assembled a panel to discuss some of the key points of the goings-on in Hong Kong and what it means for those trying to do business there.

Panellists included: Richard Eu, Chairman of TCM business Eu Yan Sang, which has 63 outlets in Hong Kong; Prof Ben Choi of the Nanyang Business School, NTU who studied the impact of technology on the demonstrations; Patrick Chan is an independent consultant who has lived and worked in Hong Kong and Singapore; and Michelle Wong, an Accredited Mediator at the Singapore Mediation Centre and Certified Mediator at the Singapore International Mediation Institute. The session entitled, What Now Hong Kong? was co-moderated by STORM-ASIA publisher Kannan Chandran and retired lawyer Ravi Samuel.

Here are some of the key discussion points.

Richard Eu: “One milestone was Occupy Central, in 2014. Also called the Umbrella Revolution, it followed the announcement of theproposed reforms to the Hong Kong electoral system.

People felt unhappy about it and went to the streets to register their unhappiness. Hong Kong hadn’t seen that size of demonstration before.

From 2014, our business really didn’t do well. In our case it didn’t decline drastically, but after Occupy Central it never really fully recovered.

There was a lot of unhappiness expressed towards China and Chinese tourists. Although on paper there were more Chinese travellers, but they were from the third, fourth and fifth tier cities. They weren’t buying the luxury brands. They were buying provisions. And they spent at the low-end restaurants.

We used to have buyers who would come annually and buy a few million HK dollars worth of products. But that slowed down, too.

The slowdown in the economy and the anti-corruption laws could also be attributed to this.”

Will The Government Hold Firm?

Patrick Chan: “Ultimately Hong Kong is China. It’s as if I’m playing cards and I have all the good cards and you have no cards. I don’t have to play you.

But China respects the government to be able to control the situation.

The current government leans towards the protestors because we are the same. Not allowing the Chinese to come in and have control we have to give credit to the current administration.”

Michelle Wong: “I have this view. China will not interfere because the One Country, Two  Systems concept was developed not really for Hong Kong, but for Taiwan.

It was developed so that Taiwan would be convinced to come back to the fold. China already knew Hong Kong and Macau would come back.

But the system has been implemented in Hong Kong, and the government must make it work, so that Taiwan will be convinced that it is to their benefit to return to the fold of greater China.”

The Mood On The Ground

Patrick Chan: “I have to be careful what colour shirt I wear. When I get into a taxi I don’t have a conversation with the taxi driver because I don’t know if he’s black, white or otherwise.

You need to be careful if you’re going into any of these zones. There’s nothing peaceful about this congregation, these kids are just looking for trouble.

I like to take photos, but if you shoot them for any amount of time, the laser beam is pointed right at your face.

It’s not a place you go to unless it’s absolutely necessary.

The mood is no good.

On Percival Street, a short street in Causeway Bay, 10 shops have shut becasue their businesses have been affected.

Across the board, I would say restaurants have seen their business drop by 80%.

Rentals are high in this area. There’s a drugstore we frequent, which had to close when Occupy Central kicked in. He used to have the customers to justify his monthly rental — around S$180,000. But this place was severely affected by the demonstrations he didn’t have enough customers, so he shut.” 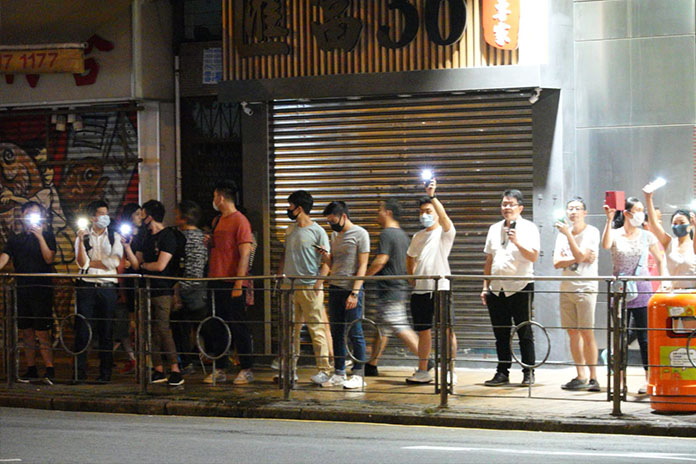 Richard Eu: “The demonstrators are targeting companies owned by China.

There’s also a lot of Chinese ownership of the traditional media in Hong Kong. The graffiti is aimed at Chinese-owned businesses. You walk on the street and you’ll see graffiti all over a Bank of China poster. A Standard Chartered poster would have non. Even the posters of TVB programmes on bus stop have graffiti on them.

The Role Of Technology

Prof Ben Choi: “Technology is contributing to the general polarization of opinion.

There are preferences about how each segment gets information.

Anti-government groups use the app Telegram. There’s a lot of live reporting and coordination taking place.

Telegram is preferred by those active in social movements. This is not unusual. We’ve seen this in the Middle East and Malaysia. Possibly because of the security, privacy and protection they enjoy on this platform. It allows for the rapid dissemination of information on a very massive scale.

Some of the channels we are following have over 50,000 active participants, so if you just pose a single coordination related message, immediately you will have a sizable audience that will take note of that.

The pro-government groups are less likely to use Telegram or forums with a specific theme. They are more active over traditional channels, like Yahoo.

Traditional media has its own opinion and stand. What is evident is that television is losing out to people with a smartphone. Anyone with a smartphone camera can do a Facebook live report. They present many live views, unlike mainstream media.

Those who are hungry for information will deviate away from traditional television channels.”

What Is The New Strategy For Doing Business With Hong Kong?

Richard Eu: “We are preparing for the worst.

We survived so many issues over the years, but this is the worst we’ve faced.

Since 2014 we’ve been trying to focus on the domestic market. We have 63 shops. The drop in sales at the shops isn’t so bad, but the drop in sales from wholesale customers, like  Watson’s or Manning, and such chain stores, has affected our supply to them.

In China, we are fully online. In Hong Kong we do have online business, but the habit is to walk downstairs and buy what is needed.

The views expressed in this report are those of the panellists.

Keep It Going: What Now Hong Kong? was held at The Exciseman Whisky Bar. For other articles visit https://storm-asia.com/category/events/keep-it-going/