Broadway favourites were given a fresh flash of zest in the recent SSO Pops Concert series. Certainly one for the fans. Reviewed by S. Sakthivel

It was a Friday night special, as the Singapore Symphony Orchestra, led by Associate Conductor Joshua Tan, tripped through songs from musicals like My Fair Lady, The Sound of Music, Les Miserables, and West Side Story. Judging from the rapturous applause, the real star, however, was jazz singer Rani Singam. 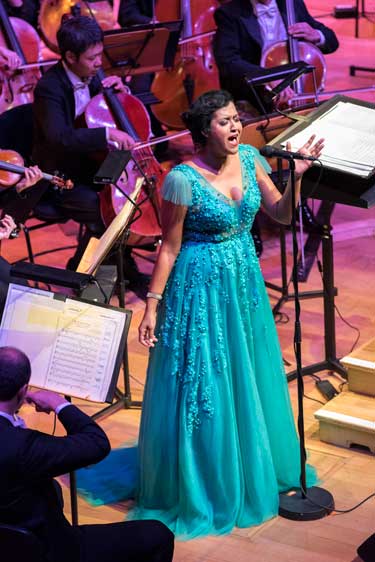 Singam injected a shot of much needed personality and character into the show with her megawatt smile and her undeniable stage presence.

While it may not follow strict concert etiquette, conductor Tan set a more casual tone for the concert by engaging Singam in light-hearted repartee, much to the amusement of the audience, as they talked about their own introduction to show tunes. Tan even took the opportunity to plug upcoming SSO shows in 2017; we sure hope they sell a few more tickets.

The show started with I Could Have Danced All Night from My Fair Lady, and dance she did; most of Singam’s renditions were accompanied by a little jig. My Favourite Things from The Sound Of Music was fun as always, with Singam making some cheeky alterations to the lyrics.

There was a heartfelt performance of I Dreamed A Dream from Les Miserables, followed by a rousing finish with songs from West Side Story. The encouragement from the crowd also prompted an encore of Somewhere over the Rainbow from The Wizard Of Oz.

Surely a good introduction to the symphony orchestra for newcomers, like this reviewer, it may still be a bit stiff and uninteresting for some. While the orchestra, accompanied by the brilliant light show, did provide a visual spectacle, some instrumental sections ran too long and lacked excitement without Singam.

Solos, littered throughout the show, from the string section, woodwind, and brass wind departments only provided short flurries. The drummer in the back surely deserved a solo, too. The orchestra played it too straight sometimes, and should have taken a cue from Singam and had a little fun with it. With Tan at the helm maybe the SSO can show us a lighter, less uptight side of what they can do.

Expectations for upcoming concerts have been raised.

We just hope it will be more pop than fizzle.