THE ANNOUNCEMENT that water prices will be hiked by 30% in Singapore, and the message that the government wants the population to be more careful with water use, revived talk about Singapore’s resources and where that discussion  could be headed.

If you recall, a government white paper released in 2013 projected a population between 6.5 million to 6.9 million by 2030, compared to 5.6 million currently.

The figures caused an uproar among the populace who felt that Singapore’s already strained transportation, healthcare and education infrastructure would be further pressured. The government had to reiterate that it was only a projection rather than a target.

That 6.9 million number has surfaced in the alternative media many times since then. There has been little official clarity on the population issue as it is a highly sensitive topic for Singaporeans.

But if you dive deeply into some data sets that are publicly available, you can potentially find some clarity if you join the dots from three sources — total passenger traffic through Changi Airport, visitor arrivals to Singapore and Singapore’s population itself.

While the correlation between total passenger traffic through Changi Airport and visitor arrivals is clear, that between Singapore’s population and passenger traffic and tourist arrivals, respectively, is more tenuous.

What can be said with some confidence is that the size of Singapore population likely has a partial impact on visitor arrivals.

They will also recommend that their families and friends work in Singapore, which could lead to more visitor arrivals related to job searches.

This has been happening for years in the Filipino, Indian and Chinese expatriate worker communities on the island.

Assessing the annual numbers between 2007 and 2016, there are solid relationships between:

(2) Singapore’s population and passenger traffic; and 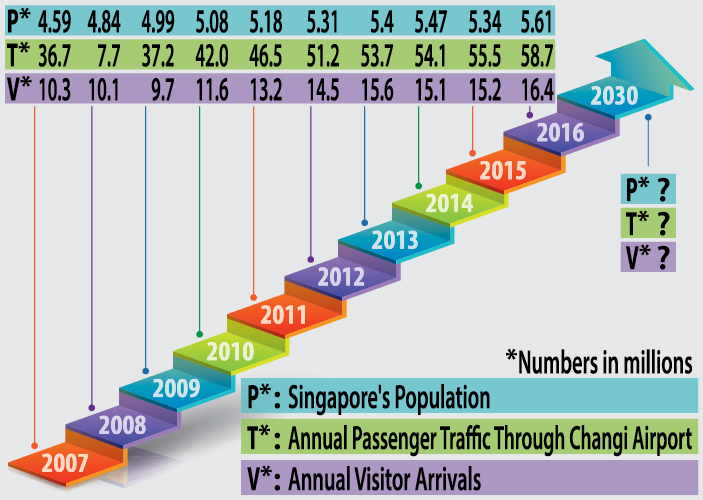 Expansion On Many Fronts?

Now, we note that Changi Airport Group’s (CAG) plans to expand Singapore’s international airport to a capacity of 135 million passengers per year by around 2025.

Say, the airport reaches full capacity in 2030. If we plug T = 135 million into the linear models, we find that visitor arrivals in 2030 should be at 39.5 million and Singapore population should be at 8.2 million.

If we take the upper end of the 2013 white paper’s population projection of 6.9 million, we find that passenger traffic through Changi stands at 88.1 million while visitor arrivals stand at 28.5 million.

This puts Singapore’s population at 7.5 million and visitor arrivals at 33.4 million.

This simple analysis suggests that Singapore’s population has to rise in the coming years in order for the capacity expansion plans of CAG to be more meaningful. But, according to the models, the 6.9 million population projection means that the airport will be running well under capacity.

CAG may be expecting changes in market conditions which will see more people using Singapore as a transit hub. That is, the relationship between passenger traffic and visitor arrivals will face dilution.

This further suggests expectations of increasing air connectivity for Changi airport with countries in the region and around the world. In particular, more ASEAN air links might be anticipated in coming years.

Meanwhile, the visitor arrivals figure of 28.5 million at a 6.9 million population level in 2030 seems a reasonable target if this increasing connectivity eventuates. How that will affect the cost of living in Singapore will be watched with some trepidation.

Lacking A Sting In The Tail