THE TRAGIC road death of a four-year old in Bukit Batok Central recently spawned a lot of reaction about the usefulness of Singapore’s overhead bridges and jaywalking.

It is unavoidable that people will always jaywalk and accidents will always happen. In cities like Singapore, people are in a hurry get where they are going and will cut corners to get there. It shouldn’t make a difference when pedestrians do it if they are careful enough doing it, but when this is commingled with motorists in a hurry, we have traffic accidents in the making.

In the case of the four-year-old, the driver of the car that hit the girl who was walking home with her helper was arrested for causing death by a rash act.

To prevent such madness, the bulk of the onus on road safety should rest on motorists as they are the ones who ultimately control the heavy and mobile machines of collision.

Drivers have to know that pedestrians, cyclists and motorcyclists are the most vulnerable road users and adjust their driving habits accordingly. Their vulnerability on the roads basically mean they own the roads.

Not cars, not trucks, not buses, but pedestrians, cyclists and motorcyclists own the roads.

This tends to be a rule of thumb for motorists in First World countries and usually why foreigners who cycle on Singapore roads have a penchant for getting upset with local drivers who do not know this simple rule of thumb. Arguably, the feeling among motorists in Singapore is that they have paid so much to put their cars on the road and use the roads that they are the most important road users. This is a fallacy and the sooner they learn this, the safer Singapore roads will be.

Click on www.storm.sg/views for more opinion editorials on a variety of subjects.

Being safe on the roads is a natural instinct for all but the mentally incapacitated, but there has to be cooperation and understanding among all road users, especially motorists. If motorists are clueless about the hierarchy of vulnerability and how they should be addressing this when they drive, then they shouldn’t be driving vehicles at all.

It goes without saying that the majority of people have the common sense to use pedestrian crossings or overhead bridges when crossing roads. They cross roads wisely, even if there is often a jaywalking element to it.

However, to keep the roads safe, drivers have to make the critical assumption that all pedestrians, cyclists and motorcyclists are nutters.

This is obviously not true, but a necessary assumption nevertheless. With this in mind, if you are an experienced driver, you should know where and what the vulnerable points in your journey are and act accordingly.

For instance, when you pass a stationary bus, you have to anticipate that some joker will run across the road in front of it. Look beneath the front right bus tyre for any leg movement as you approach a bus.

Globalisation — One Size Does Not Fit All 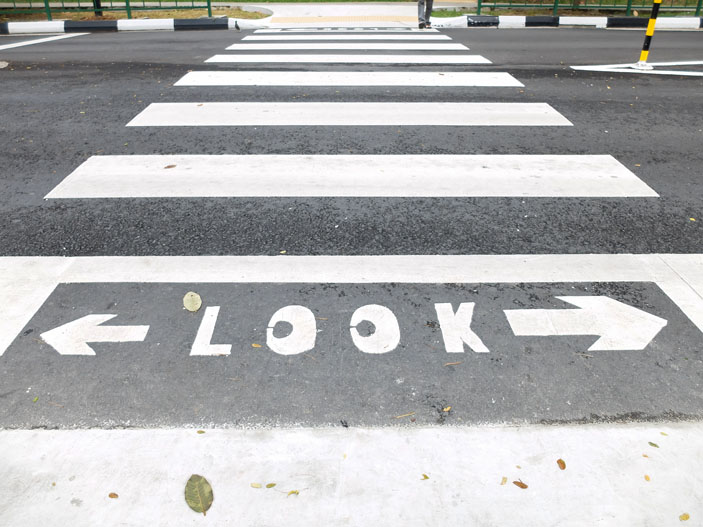 The problem with Singapore is that it is hard to find a unique, local rhythm in traffic conditions. If you have been to cities like Mumbai, Colombo, Ho Chi Minh City, or Denpasar, among others, you will notice that amid the traffic chaos, there is an order, a rhythm. Every road user knows their role when they are out on the roads. They are part of a community that ensures the safety of all even if sometimes they cut things very close. Sure, accidents do happen, but not nearly as often as the chaos on the roads seems to indicate.

There is no such rhythm in Singapore because there is no sense of community on the roads. If you signal to ease right on the expressway, the motorist behind you on the right lane will speed up. There is no real understanding that giving way actually speeds up traffic.

If you stay clear of a box junction when traffic is stationary, others will cut into and hold their position in front of you in the box junction until the traffic flows again. Motorists also don’t slow down when they approach pedestrian crossings on slip roads when it should be a key driving habit even if there is no pedestrian around.

Further, there is way too much lane changing in Singapore. A rudimentary analysis of this suggests that Singaporeans lack conviction in the path they have taken and are always seeking a better path. This is best exemplified at the Customs checkpoints in Tuas and Woodlands.

Perhaps research can be commissioned by the Singapore Road Safety Council (SRSC). It was set up in 2009 and its stated mission is “to continually improve safety on (Singapore’s) roads by inculcating good safety practices among all road users.” On its website, it has plenty of dos and don’ts for pedestrians, cyclists, motorcyclists and motorists. In a way, this helps to build a sense of community on the roads.

But SRSC should put its greatest focus on trying to draw a sense of community from motorists.

They are and will always be the most dangerous group on the roads. Their individualism and sense of entitlement overwhelms the sense of community on Singapore’s roads.