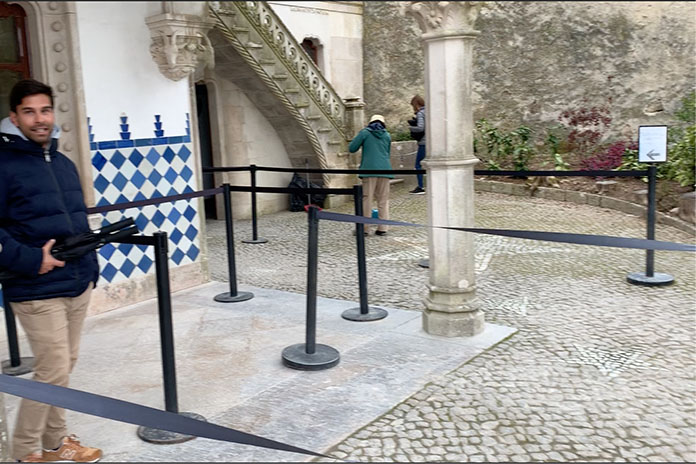 AS he surveys the few people waiting to enter the Quinta da Regaleira in Sintra, our guide, Augusto Silva shakes his head.

With a resigned look on his face, he says he’s never seen it this bad in his 8 years as a tour guide in Portugal.

Covid-19 is making its presence felt in Europe and precautionary and defensive measures have been swiftly put into practice.

Major attractions are limiting the number of visitors in groups, to minimise close proximity. Some sites, like the Palace of Pena are not allowing visitors to stop and gawk. Keep moving!

Only card transactions are allowed. No cash is transacted at major tourist attractions.

Some places do not allow the guides to enter, to keep the numbers to the basic minimum.

No temperature checks as yet. But there is always the threat that all major attractions may be shut down.

Streets are empty and shops that used to have ceaseless lines are vacant. And every customer is viewed warily.

“Even when we had the European flu and the mad cow disease we still had business. This shut down is very different,” Silva says.

“My company, like many others, is talking about closing down for at least two weeks. I had three weeks of full bookings as spring was coming, but this week, all but one cancelled. I think that last one will also be cancelled.

“I think I’ll go home and stay safe. It’s better that everything closes down and we sort out this issue,” Silva reckons.

Where major attractions would be bustling with activity and noise, they are now almost deserted, with no queues or crowds to contend with. For those who abhor crowds, it’s a chance to see the attractions without having to jostle with the masses, but for Silva and those in the tourism industry, it is a sad sign of the times.

Our holiday started before any travel advisories were in place. If we’d cancelled our plans, we would have incurred penalties.

By the time we reached Europe, Asia was acting on its nervousness. A day after landing in Portugal, Singapore Airlines (SIA) cancelled our return flight.

After calling the help number and listening to the hold music for close to two hours, we managed to change our return flight.

Soon after, the travel restrictions started to kick in, in Europe.

Four days before our departure date, we got an SMS that our rescheduled flight had also been cancelled. No alternative flights were offered!

We spent two hours trying to get through to SIA, and kept hearing that insufferable music and irrelevant messages, but could not connect with a human voice. The SIA bot was of no use, unable to comprehend the issue at hand and giving useless advice.

Social media helped with friends offering to take up our situation with the SIA office in Singapore. Since there wasn’t an SIA office in Lisbon I asked a pilot friend to help get a number at our transit point, in Frankfurt.

I also rummaged through my address book and came upon an SIA station manager contact on the other side of the planet. He had since left his post, but someone else had taken over the phone number. He, or she, was wonderfully helpful, and gave an SIA number in Singapore to call. And it worked!

Immediate contact was established with a surprised SIA staffer, and our flight out was advanced by two days.

The sooner we are out, the less likelihood of being caught in a nervous trap and the potential of a city entering lockdown mode.

There’s still a day to go, and hopefully there will be no surprises!

But the lessons learnt from this holiday include the fact that the adventure of travel in future includes sudden uncertainties that could be brewing silently over time. So, get good travel insurance, and make sure it covers these sort of situations.

Many insurance policies will have loads of fine print that will make them slippery eels when it comes time to make claims.

SIA, for all its claims of being a global airline, has a lot of ground to make up in terms of delivering a back end service that should have been prepared for this sort of situation. It wasn’t an overnight predicament, and there were at least a few weeks to anticipate the challenging times to come.

As an airline, SIA takes a pretty penny from its customers, who expect a service to match. At least have a human voice to help ease worried minds.

Sending a press release about “SIA Experiencing High Volume Of Customer Enquiries” only explains how unprepared the major global airline is.

And it’s always good to leave your addresses in your phone book, no matter how old they may be. You never know when a contact might come in handy!