CREATURES of habit and journalists who quenched their creative thirsts at The Yard English Pub will rue its passing when it closes the doors for the last time today.

For the uninitiated, it was a drinking place along River Valley Road styled as an English country pub and popular with journalists. It opened in 1983 when Singapore Press Holdings was still churning out stories at Times House on Kim Seng Road.

The décor of the Yard did not change over the years. There was some upholstering work done on sofas but the ambience remained the same for 34 years.

When The Yard opened the North-South and East-West lines of the MRT were still under construction. Imperial Hotel was operating on the top of the slope across the River Valley Road from Mohd Sultan Road, while Clarke Quay was still a network of old godowns close to the Singapore River. The Mitre Hotel on Killiney Road was still receiving guests and Lee Kuan Yew was running the country from his home on Oxley Rise.

Mobile phones were the realm of sci-fi, and drinks were arranged in person or through fixed-lines. Sometimes people even sent invitation cards or notes to meet up for drinks. Pagers were also used. It was so quietly civilised. The phone in the pub often rang as people would inform their friends who were already there that they were running late. Still, people didn’t run late as often as they do today.

The Yard represented a less complicated time in Singapore. Its surroundings changed dramatically as the years passed, but its owners, the Poons, stood steadfastly to the notion of an old-fashioned English pub. They had the fortitude and conviction not to follow the prevailing F&B trends, happy to maintain the place as it was for regular and new customers, both local and expatriates.

One of the keys for the longevity of The Yard was that the Poons owned the property. Mr and Mrs Poon didn’t have to contend with rising rents in Singapore’s retail space, though they saw the value of their asset increase as property prices rose. They could have closed the pub and become landlords, but they were passionate about what they were doing.

They still can, now that the decision to close has been taken.

Too Early To Celebrate The Residential Market Recovery?

Some people over the years may have accused the Poons of being unambitious. They may have said that the couple could have done much more with their space — refurbished it, upgraded it, themed it differently. However, that would surely have shortened The Yard’s longevity. The fact that the Poons kept the place as it was for close to four decades was the secret of its longevity. They didn’t have a landlord to worry about, so why go to the trouble of fixing something that wasn’t broken. 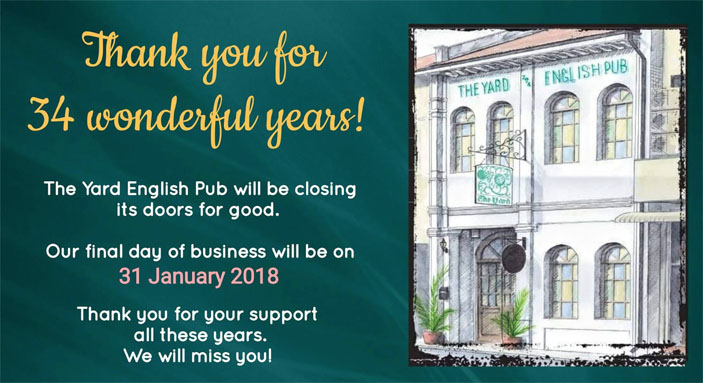 The Yard symbolised something very un-Singaporean. It didn’t get caught up with Singapore’s frenzied economic growth and societal evolution. It didn’t throw money into new fads. It remained an oasis of calm and consistency as all hell broke loose around it in the River Valley Road area. Customers were lost when pubs opened in Mohd Sultan Road in the 1990s, led by The Front Page, which was started by a Business Times journalist. This would have hurt the Poons at the time and perhaps caused them to think of different options for their space. However, The Yard just went along as normal. None of the pubs along Mohd Sultan Road exists now. And The Yard will join that sad list after today.

The Yard had a loyal bunch of customers who would always visit the place earlier in the evening for a few drinks before heading out for more drinks along Mohd Sultan Road later at night.

The patrons of the Yard showed their loyalty not only to the Poons but to the idea that there is comfort in things that don’t change much, and there is an innate and immeasurable value in remaining understated and humble.

Another secret of its longevity was that the lack of gimmicks and noise, bells and whistles, meant that people could actually have conversations. Back then, there were no mobile phones to disturb conversations. You could tell stories and people couldn’t Google search for facts to confirm or disprove a story. There was a lot of fake news but that was part of the fun.

When news hit that the Yard was closing, it was described as an icon in River Valley Road. Its iconic status was underpinned by its longevity and refusal to give in to progress. It didn’t project a sense of awe but a sense of comfort, from memories of conversations.

Man-made icons in Singapore can take a leaf out of the Yard’s relatively thin playbook. A sense of awe dissipates after a few sightings of man-made icons like Marina Bay Sands, Gardens by the Bay or The Esplanade.

For iconic status to stick, they have to be receptacles for memories that are made organically in your backyard.