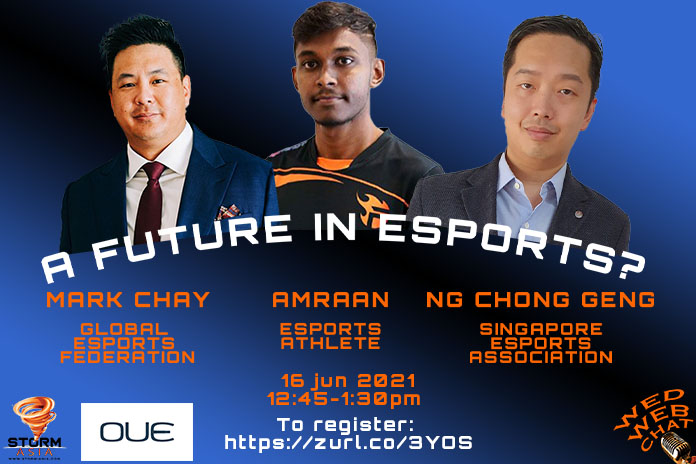 IT may seem like time wasted by the young as they play games well into the night, but that’s just a biased generational view of esports.

When you have the likes of semi-pro Amraan Gani, 27 making more than $100,000 in prize money from playing in esports tournaments, many parents may well sit up and take notice.

“Esports has given us gamers a platform to showcase our talent. It has given current and future gamers the hope of achieving great heights and getting rewarded while enjoying what we do,” Amraan enthuses.

With jobs being cut and a pandemic further slowing things down, would esports be a good avenue to consider, as a player, a developer, marketeer, investor?

“With its young population and the great interest in gaming, Southeast Asia has the potential to become a global hub for esports,” reckons Ng Chong Geng, President of the Singapore Esports Association (SGEA), the national governing body for esports in Singapore and a member of the Singapore National Olympic Council.

The tech venture capitalist who is also a co-founding board member of the Global Esports Federation (GEF), says esports in the region is only at its starting point, with viewership and participation numbers growing daily.

The upcoming inaugural Global esports Games to be held in December (pandemic notwithstanding), will raise awareness of esports, as 400 players from 80 countries converge in the multi-titled world championship.

Mark Chay represented Singapore in swimming from Southeast Asian Games to the Olympics. He brings his experience in international sports to the WED WEB CHAT on esports, as Director of Secretariat, GEF.

Amraan, Chong Geng and Mark Chay, Director of Secretariat at GEF, are the panellists at this week’s WED WEB CHAT — A Future In Esports? on 16 June. To register for the discussion, from 12:45-1:30pm, click on this link: https://zurl.co/3YOS

Games like Starcraft, DOTA 2, World of Warcraft, Call of Duty, Fortnite, Candy Crush, Clash of Clans, Pokemon and League of Legends are among the hundreds of games that have developed ecosystems globally.

Global esports revenue will grow to US$1.1 billion this year, according to video game market tracker, Newzoo Project. This year, the esports audience will continue to grow, to 474 million, of which 234 million will be enthusiasts, who watch esports more than once a month.

China will have the bulk of esports enthusiasts — 92.8 million, and will also have the largest global market for games live stream, with an audience of 193 million.

It’s not fun and games and easy money. First you have to be good, and players are encouraged to support the ecosystem and stream often to satisfy the insatiable demand for content by their fans, and to increase ad revenue and sponsorship.

Opportunities in the industry go beyond the gamers. There can only be a small number of tournament winners, but the support system offers vast  possibilities.

Born Out Of Need

Esports is not new. We’ve been playing video games for many decades, but esports — video games played in a competitive and organised fashion — was  popularised in South Korea, at the turn of the century, to lift the country out of a financial crisis.

By focusing on its telecommunication and internet infrastructure, it spawned a culture of gaming clubs that popped up around the country, where gamers would flaunt their skills.

Soon, formal competitions were being organised, and the government was quick to spot an opportunity with this soft power, forming the Korean Esport Association to establish basic rules, broadcasting rights and players’ contracts. A global first.

With the Internet’s global reach, the rise of global gaming was inevitable.

Companies like Nintendo and Microsoft pump out games, while a more “hands-on” breed — Riot Games, Activision Blizzard and Valve Corporation — actively built up the ecosystem for their various offerings.

The latter group saw value in organising tournaments since it extended their business opportunities and built up a direct connection with fans. Regular updates keep the long-running games alive, while those with dwindling following are axed.

The need for immediate response across networks continuously pushes the development of better infrastructure, and the arrival of 5G networks will serve as a further boost for gamers and the ecosystem.

The pandemic disrupted esports with in-person events all but halted by travel restrictions, vaporising ticket revenues. As the market waits and watches the uncertain road ahead, new deals are understandably on the decline.

But decentralisation caused by the pandemic may result in esports expanding its reach and developing new growth areas with fresh audiences.

If you are game to participate, what role could you play in it?

Amraan, Chong Geng and Mark Chay, Director of Secretariat at GEF, are the panellists at this week’s WED WEB CHAT — A Future In Esports? on 16 June. To register for the discussion, from 12:45-1:30pm, click on this link: https://zurl.co/3YOS