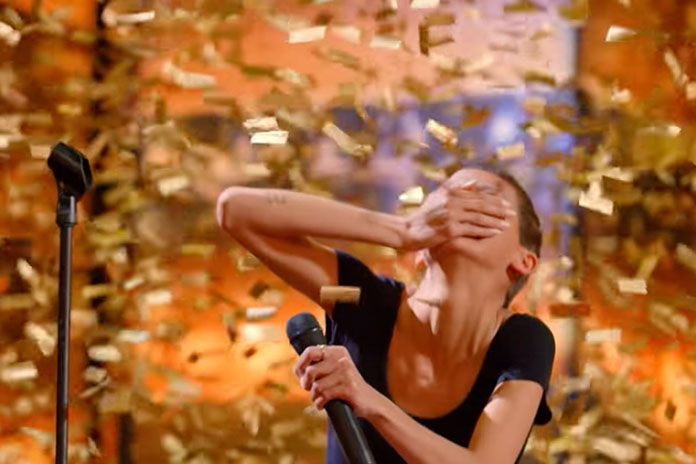 IN under 10 minutes Nightbirde delivered a lifetime worth of quotes to live by.

The America’s Got Talent singer got a golden buzzer from Simon Cowell for a performance that seemed to almost make light of her state of life.

Jane Marczewski was diagnosed with terminal cancer on New Year’s Eve 2019  and given six months to live and a 2% chance of survival. She had gone into remission in 2020 but the cancer returned.

“The last time I checked, I had some cancer in my lungs, my spine and my liver.”

Her original song It’s Okay is a breezy account of what she’s been through in the last year. But understanding her predicament adds greater depth to the tone and intent of the song’s message.

“I have a 2% chance of survival, but 2% is not zero,” she said in an interview following her successful audition.

That spirit of looking on the bright side of things is matched by a lovely smile and cheerful disposition, a combination which won over the judges and the audience.

“It’s important that everyone knows I’m so much more than the bad things that happened to me.”

Jane, 30, has battled recurring cancer but seems determined to live out her dreams.

While some are resigned to their fate, the realisation of a compressed lifespan tends to push some terminally ill patients to achieve more than they normally would have in that uncertain and truncated period of time.

It would be 15 years this month that my sister lost her dogged battle with the big C. It was all over and done in nine months, which left everyone who cared about her with little time to accept the fact that her vivacious personality would only live on in memories and actions.

Not one to be easily defeated, she continued with life as best she could, juggling chemotherapy and completing her doctoral thesis while comforting a steady stream of distraught well wishers with her good humour and concentrated joie de vivre.

She would have resonated with It’s Okay and Jane’s approach to living life to the max, warts and all.

“You can’t wait until life isn’t hard anymore before you decide to be happy” is Jane’s philosophy, echoing my sister’s sentiments.

Words we could all live by in a world of ceaseless challenges and uncertainty.