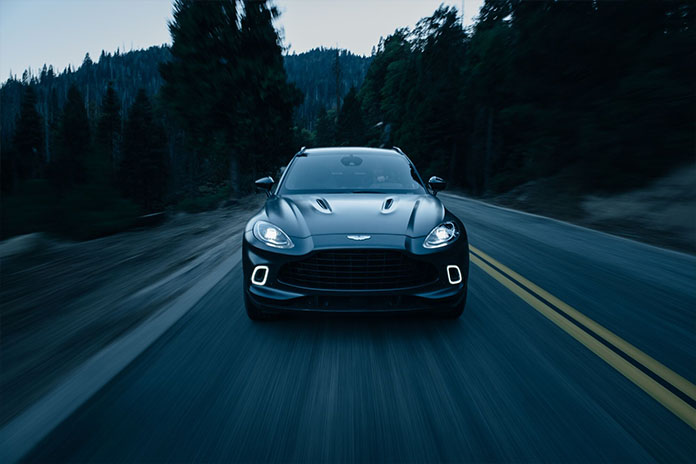 THE SUV continues to drive a major part of the business for car companies, with almost one in three cars sold being of this bigger variant.

In 2010 there were 35 million SUVs worldwide. By 2020, that number had swelled to 200 million. While most brands have included the SUV in its range of vehicles, luxury brands initially kept their distance. Unwilling to succumb to the demands of the masses.

But the potential money to be had has seen the big players join the parade: Rolls-Royce Cullinan; Bentley Bentayga; Lamborghini Urus. All to good effect (on the bottom line), if not the most attractive of designs. 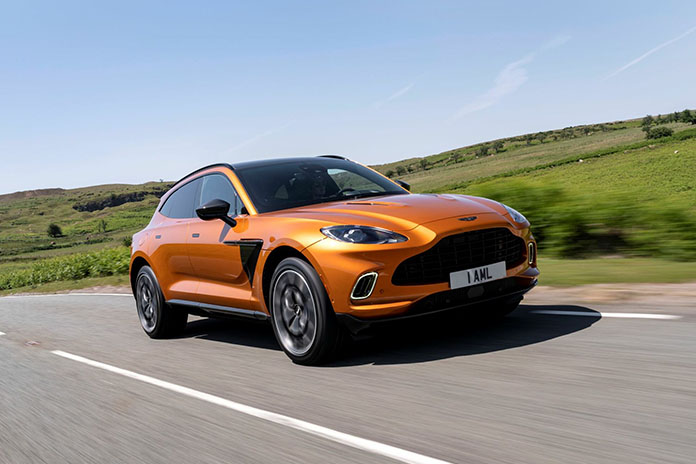 Aston Martin, known for its sleek sports cars must have been wondering how it was going to combine performance and form factor without losing its audience and its image. David Brown (note the DB initials) had designed a prototype SUV in the 1950s, but the brand raced along in sporty fashion, taking on spy creds courtesy of James Bond.

Owned by a combination of conglomerates and individuals, the British car manufacturer decided to set up a new facility in Wales to build the DBX, its SUV model for the rich folks with family needs.

Deceptively designed to look smaller than it is, the 5m+ car has a strong Aston Martin look and feel. The front has that familiar big grille, but once you walk around the side, you see the unmistakable rising roofline and the large body designed for comfort but not necessarily for grace. The back, with its little flipped up duck’s tail of a spoiler completes a look that seems a phased work in progress, but one with lots of potential. 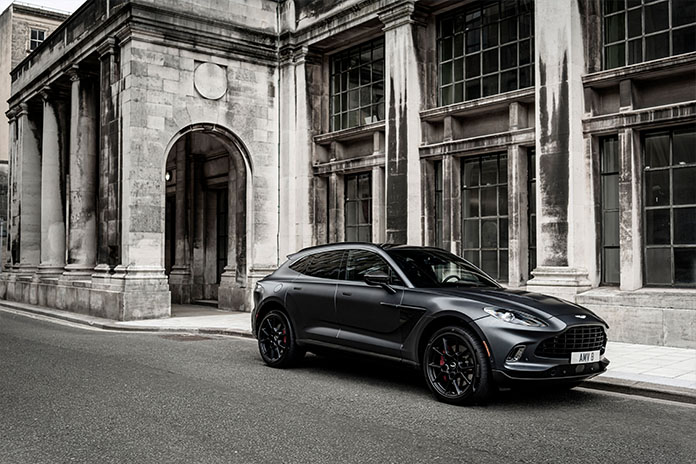 With sculpted metal everywhere, and riding on those 22” wheels with the huge brake callipers, the DBX shows it’s trying hard to impress those who want to part with *S$788K for it.

And once you step into the cabin, you are more than suitably impressed by the luxury that screams out at you. 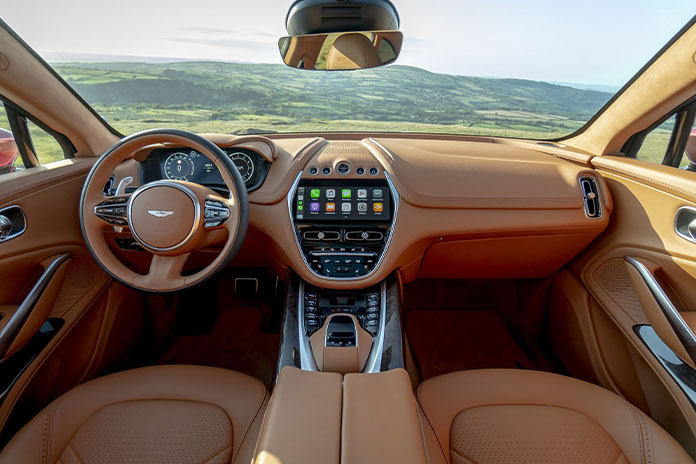 Oxford tan leather surrounds you in the test drive unit. The sandy hue has permeated the cabin — from the pillars to the speaker grilles and the steering wheel, it’s like you’re in a plush desert oasis on a powerful camel. The monotony of sitting in a sand dune is broken by strips of metal and shards of wood, and glass — when you look up through the roof, and at the centre display.

The back of the oasis offers excellent legroom and headroom, since the roof slopes past the rear seats. 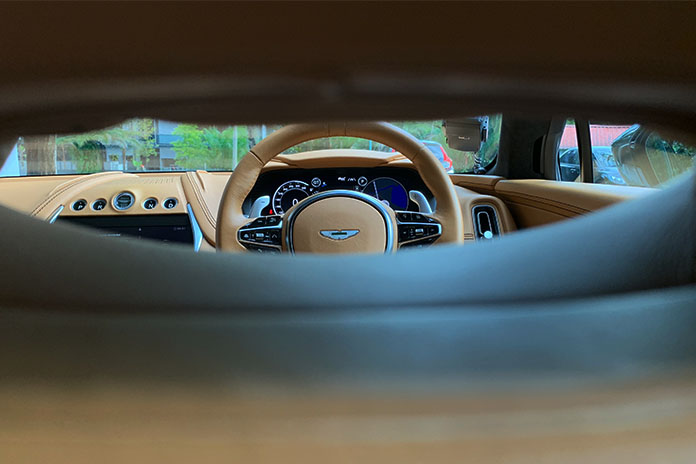 But for it to be an Aston Martin, the central focus has to be on the driver. To this end, the designers have taken into consideration feedback from the Female Advisory Board, who will find the resulting subtle touches to their liking. Women are an important segment for the SUV market.

There is also a range of accessory packages to customise the DBX: From a touring pack to a pet pack, adventure pack to an expression pack, and then a few more. 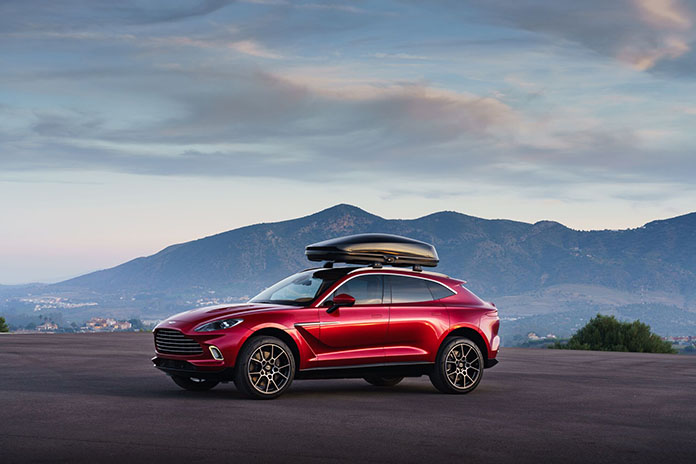 Connectivity seems vital for the modern generation, but instead of dishing it out in spades, the DBX rolls it out carefully. Mercifully, there isn’t a touchscreen, instead, control of the car’s features is via a responsive dial on the centre console and the multi-function steering wheel. All this leaves it looking a bit old-world, which will probably change as its partners in the business, which include Daimler and Ford, come up with the stylish goods. 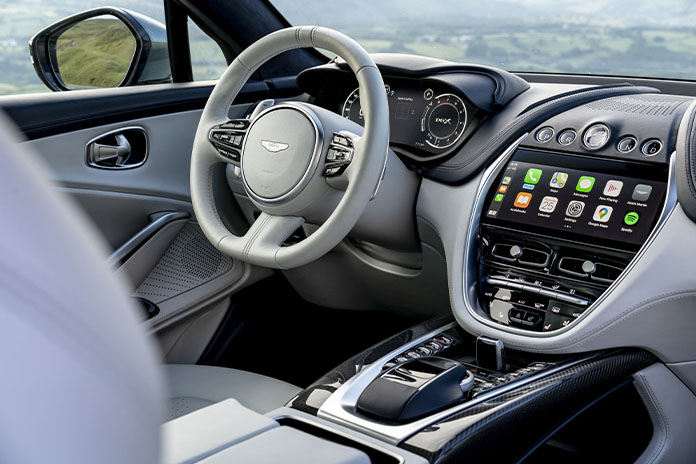 For now, there’s wired connectivity to get Apple CarPlay and Android Auto up and running. It’s all quite smooth and seamless, with the powerful audio system delivering crisp sound (it can be amped up to an 800W, 14-speaker array) and clear, sharp visuals on the dials.

The centre display, when powered off, turns into a clock. The dials on the dash change colour as you shift modes, and you can set them up via a multi-step process to show what you desire on the driver’s display.

For the money being splashed out, though, there’s still a lot missing. There isn’t wireless charging, or auto hold, nor a head up display. And no soft closing (A survey showed that people slammed their doors anyway, by force of habit, so why bother with these gently-gently features was the argument.).

Will the customer mind missing out on such conveniences? They well might, but Aston Martin has some ground to improve the next offering.

But included is a slew of driver assists to keep the occupants safe from harm…within reason, of course. 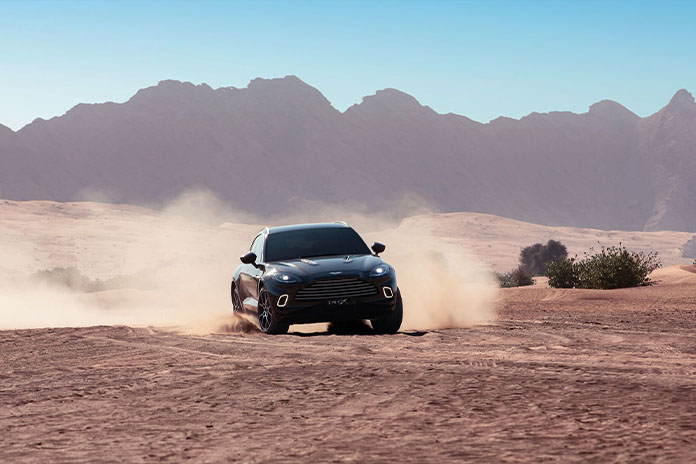 And, now you can take your Aston Martin comfortably off-road, something a fleeing 007 will appreciate. You can wade into 0.5m of water, and you can raise or lower the DBX thanks to the air suspension. 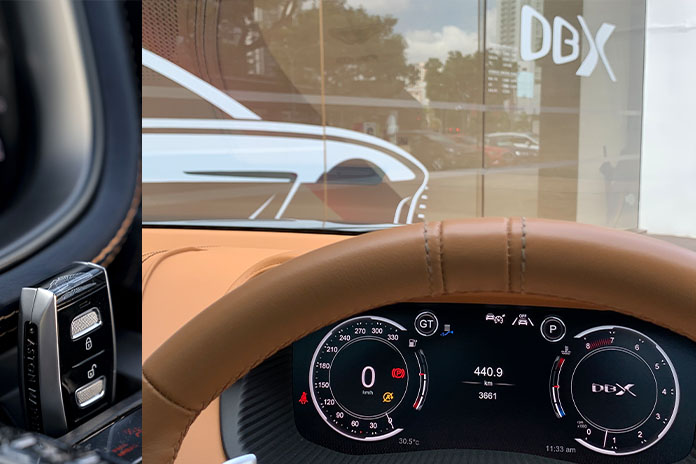 Punching the centre button on the dash, powers up the 4L twin turbo V8 with a resounding roar. Nice sound, but the buttons lack that crystal sparkle. Prod at the D button on the dash to get underway. You can adjust your drive modes on the centre console to go sporty or off-road, or cruise along in GT mode.

While speed is not an issue with the DBX — it sprints up to 291kmh — it’s how it handles day-to-day taxiing of kids and groceries that will earn it a seal of approval. There’s too much power for the mundane, and it does take some getting used to as the 9-speed automatic shifter provided by Daimler seems eager to get you to your destination in a rush. A lot of lurching and eager jumps later, you cultivate the right foot so it eases into the drive. 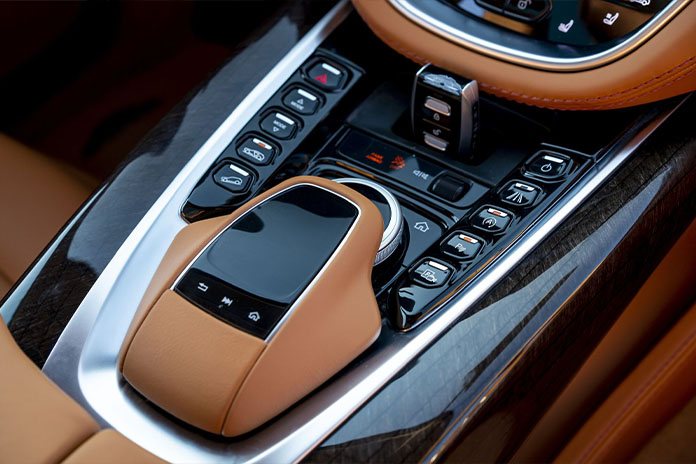 You have to be extra careful in city traffic lest you lurch off at a light.

The fact that you can get up to 100kmh in 4.5 seconds means this is an eager machine, but given the cage it’s carrying, it’s a bit of a rock-and-roll ride. The rocking motion can range from annoying to unsettling, depending on the individual, especially if you’re used to a swift but stable ride from the marque’s other models.

When you take it on a longer, winding run, the ride becomes more engaging. The DBX attacks corners enthusiastically, with no uncertainty or hestiation. Charging through one of those sudden torrential downpours, the DBX gripped firmly and swept through the water, it’s active all-wheel drive distributing the torque where it’s needed. And when put to the test, the big brakes brought the DBX to a sharp and sure stop.

The paddle shifters are handy, but running through so many gears can be distracting as you try and get to the desired gear. And once they are activated, it’s all manual from thereon, until you pull up on the right paddle and hold it, or hit the D button on the dash to get it back to automatic drive mode. It’s a good thing the D button is close to the steering wheel in the right-hand-drive models. It would be a bit of a stretch otherwise.

While Aston Martin may have been slow to enter the SUV game, the DBX will likely give the brand a leg up in sales, especially as more variants are rolled out. Best to cash in while it remains relevant, for there will be more challenges around the corner, in the shape of electric and autonomous vehicles. 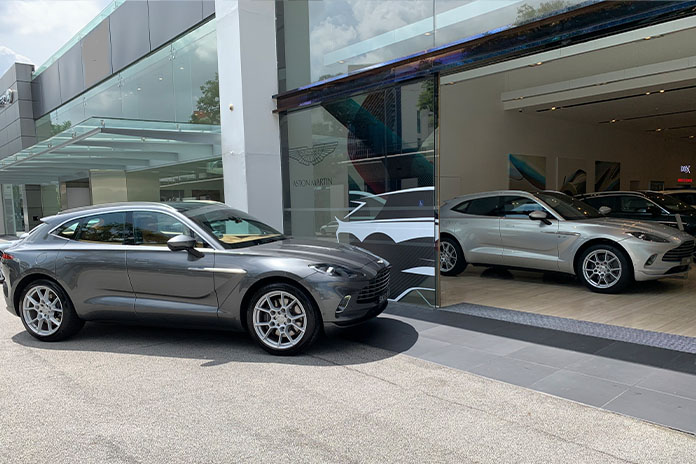 See also  Audi A7 Sportback - Sharper With A Smaller Engine