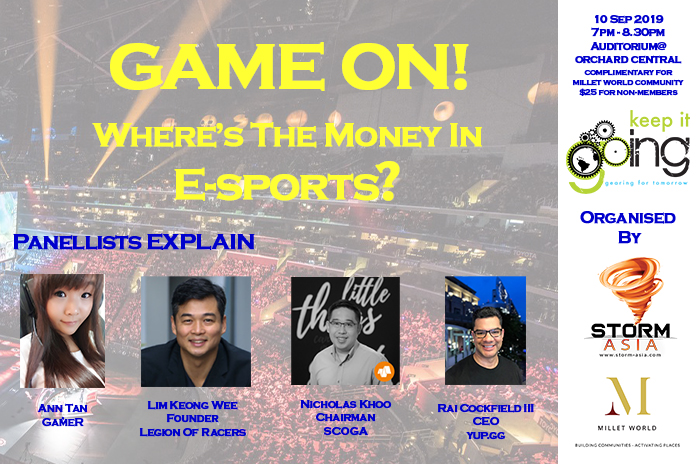 WHAT used to be viewed as an addictive and time-consuming bad habit has fast escalated into a potentially high-paying sport.

Video games drew you away from your studies and helped you while away the nights; often done furtively so that your parents wouldn’t come raining down on you with all sorts of threats about a future devoid of income and progeny.

With technological embellishments and some marketing sparkle, it’s now evolved into E-Sports, a US$1.1 billion industry that should see parents singing a different tune.

Video games, once a solo preoccupation is now a networking activity. E-Sports is no longer a pastime, having grown into a profit-generating passion played by professionals.

Most of the big winners are in their early 20s, with the most popular game being DOTA 2 (a sequel to Defense Of The Ancients).

Counter-Strike: Global Offensive was next, with about half that value in prize money.

League of Legends, the most played game, had a pot valued at US$14.12 million.

The fans of these games have spent millions of hours following the action, online and at tournament venues. The 2016 League of Legends World Championship final attracted 43 million viewers.

On the business side of E-Sports, the market revenue is dominated by sponsorships (US$457 million) followed by media rights (US$251 million) and advertising (US$189  million). These estimated figures for 2019 paint a healthy picture for those who are good at the game and the industry supporting it.

So, for those who can’t cut it as a player, the opportunities exist in other areas, be it a game developer, marketeer or any role that could be crafted within this global realm of fantasy.

Panellists at tomorrow’s Keep It Going discussion on Where’s The Money In E-Sports? bring different facets of the industry into sharper focus.

Nicholas Khoo, Chairman of Singapore’s Cybersports and Online Gaming Association, has  close to 20 years of diverse experience in tech and media, having directly reported to Fortune 500 CEOs and led a regional team for Visa advising Asian Internet giants like Tencent and Alibaba on managing risks for their digital transactions.

Rai Cockfield III, CEO and Co-Founder of yup.gg, a new community-focused digital talent marketplace used to be Head of APAC at the live-streaming platform Twitch.

Lim Keong Wee, Founder of Legion Of Racers, Singapore’s first SIM Racing League that combines the best in motorsport and the gaming world.

Ann Tan is a gamer who has been playing DOTA 2 for about 11 years and insists that gaming is “not a waste of time”.

If you’d like to find out more about the business of E-sports, STORM-ASIA and Millet World are organizing a panel discussion on 10 Sep at 7pm at the Auditiorium@Orchard Central.

See also  You Are What You Shop