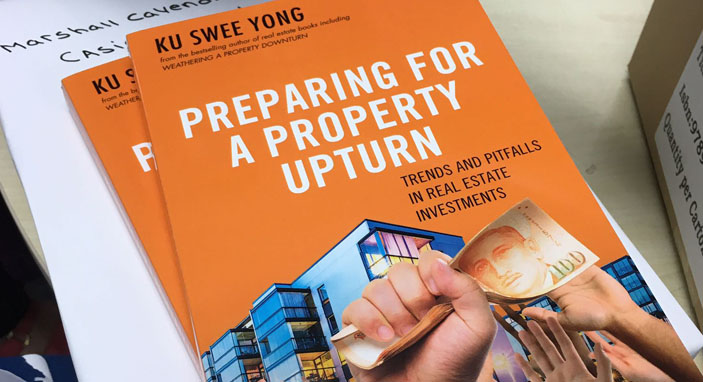 AN AGEING population and ageing public housing could prove troubling for the Singapore  property market in time to come.

The cooling measures are in place to help stabilise the property market, but all that’s done is slow down the transactions. And how will the shrinking population size and the lower contribution to the Central Provident Fund (CPF) affect the landscape?

The shrinking involvement of the Baby Boomer population in the workforce, the high cost of living, and the shifting shape of globalisation will have a significant effect on the options existing and potential  property owners will exercise. Downsize and use the cash to live out their years? Hunt for a retirement community (which is scarce)? Invest elsewhere?

What Should Be Your Property Play?

In his fifth book, Preparing For A Property Upturn, Ku Swee Yong explains his thinking behind his observations of the industry he has been involved in since 2004, when he joined Singapore’s largest private land bank owner, Far East Organization.

Should you splash cash on property?

Ku, who is the CEO of International Property Advisor Pte Ltd, offers his views. You would be well advised to listen — or read  — them since he has a refreshing contrarian view on issues of the day.

Here is an excerpt from his introductory chapter to set the tone. Following this is a video of his thinking that has led to his book.

Chapter 1 “Nearing the Edge of the Precipice: Ageing Population and the Housing Market”*

Singapore citizens are ageing. We have rising life expectancy coupled with falling birth rates. Extrapolating the ageing trend points us to a few inevitabilities in the next 15 years:

resulting in a need for further automation, more foreign workers, or both.

Baby boomers retiring from the workforce and passing away will lead to increased CPF withdrawals. However, there will be comparatively fewer young workers entering the workforce to contribute to CPF. The imbalance between funds redemption and funds contribution will likely lead to further amendments in CPF withdrawal limits and withdrawal ages.

The retirement of about half a million baby boomers will cause some adjustments in the housing market. Some retirees will downsize or “right-size” their housing options, selling their larger homes to purchase or rent smaller homes while saving cash for retirement use (which may also affect consumption volumes and patterns).

The Trump Effect On Tourism

Transportation Delays — Should We Be Compensated?

The passing on of the baby boomer generation will cause a seismic shift in the housing market due to a large increase in resale HDB flats. The effects of our ageing population on housing prices are not yet prevalent today but are projected to be acute within the next 15 years.

Let us take a deeper look into how the issue of our ageing population may affect the supply of HDB flats, against the backdrop of

(a) a shrinking youth population,