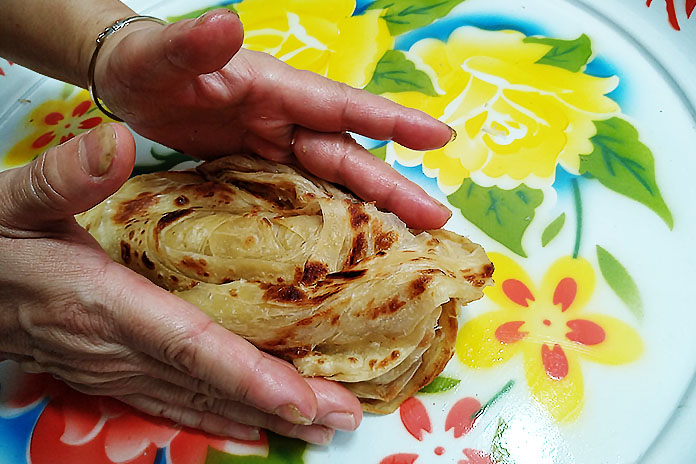 TUCKING into freshly made roti prata (Indian flatbread) is far easier than you think. Surprise your loved ones with roti served piping hot from the griddle. Soon, your neighbours and even your friends will come a-knocking, asking to join you for roti breakfast. Whip up a batch for the long weekend on 9 August in conjunction with Singapore’s National Day.

1.In a large mixing bowl, combine flour, sugar and salt until well mixed. Make a well in the centre. 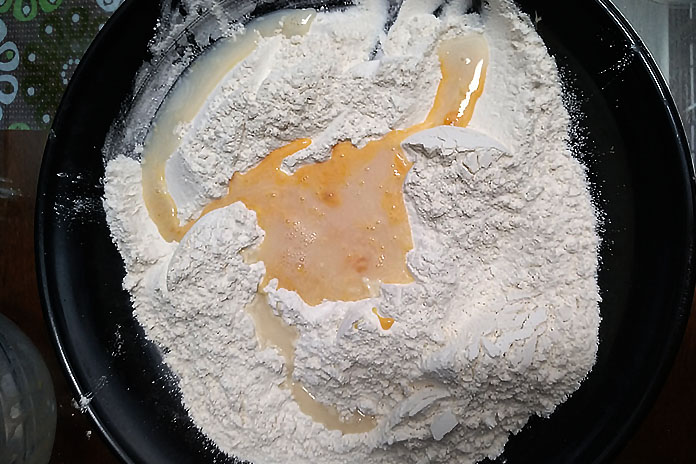 3. Using your hands, bring everything together until it forms a rough dough. Knead for about 5 minutes. Shape into a ball.

4. Coat dough lightly with some oil. Cover with a wet tea towel. Rest for 1 hour at room temperature. 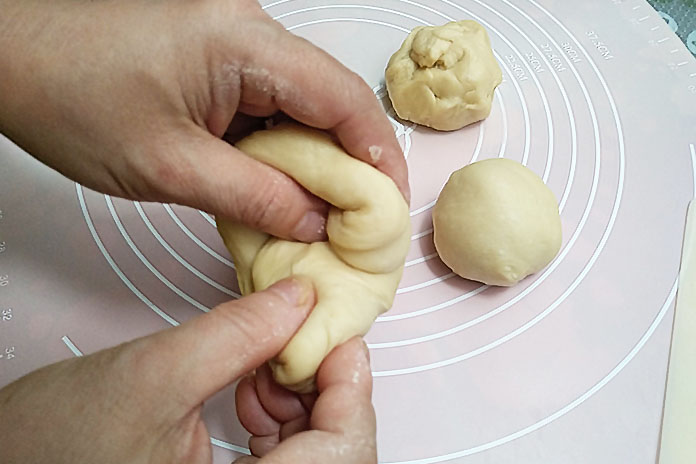 5. Divide dough into 6 equal balls. Grease each piece with oil. Fold and shape into smooth balls.

6. Grease a large container with some oil. Put dough inside, cover it. Refrigerate it overnight to proof. 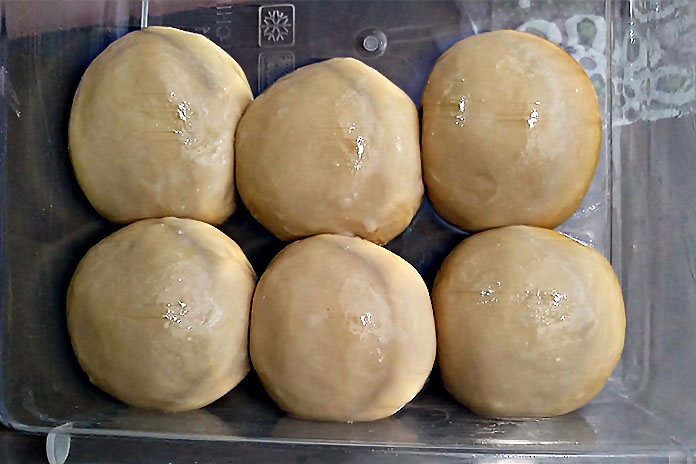 7. The next morning, remove container. Dough will be very firm. Allow it to stand at room temperature 30 minutes for dough to soften.

8. Grease a big round enamel tray around 40-50cm in diameter – this is to stretch dough until paper thin.

9. Place one ball of dough inside large enamel tray. Using your palm, flatten dough. Smear it with some oil and sprinkle flour lightly over it.

10. Next, gently pull dough outwards and stretch it over edge of tray until translucent. It will still be intact. Drizzle some oil over it. 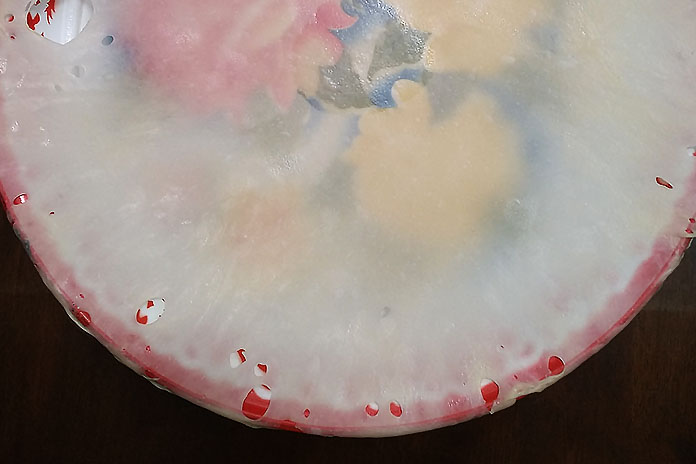 11. Starting from the edge of enamel tray, roll up dough until it becomes a long strip. Next, holding one end of dough, coil it up into a spiral. Allow it to rest at least 10 minutes. 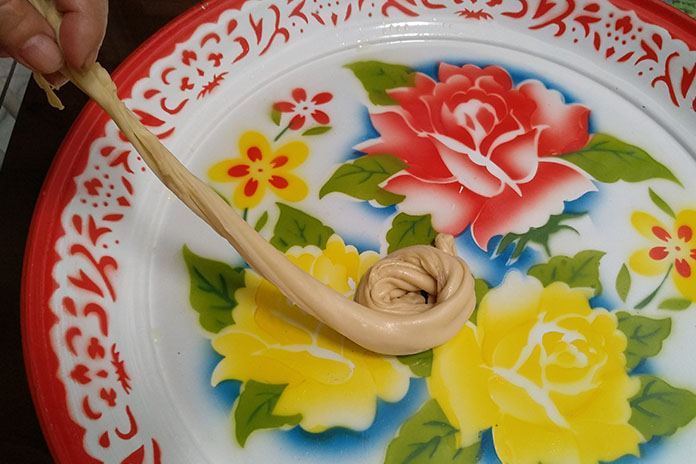 Tuck the other end into the centre. Allow it rest for approximately 10 minutes. 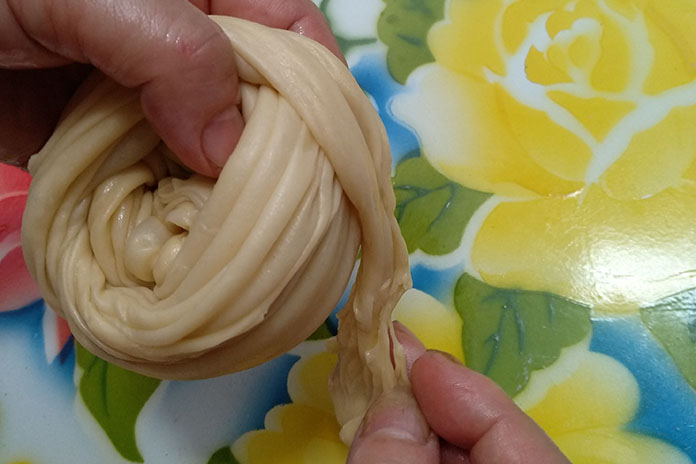 12. Heat up a flat frying saucepan, measuring 25cm diameter. Using your palm, press dough down and flatten it.

13. Put a teaspoon of butter into pan, allowing it to melt. Turn fire up to medium low. Pan-fry roti one by one.

14.  Cook roti until crisp and brown, about 35-40 seconds each side, and then 15-20 seconds for every subsequent flip. It takes about 3 minutes per roti. 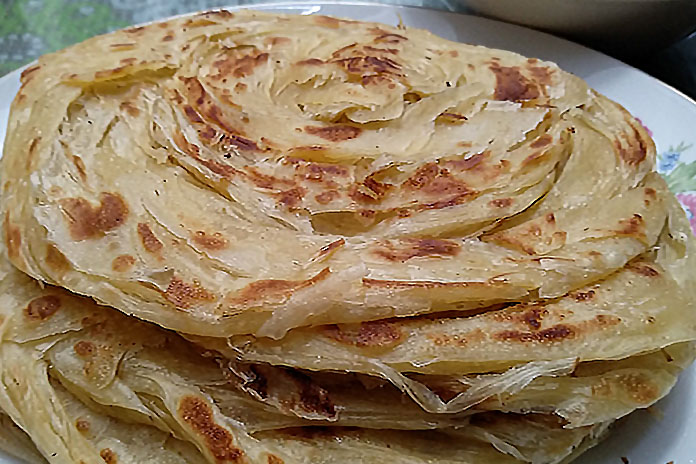 15. Transfer roti from pan onto a large flat plate. Using both hands, slap roti a couple of times – this fluffs up the roti. Enjoy it with your favourite curry.

TECHNIQUE: The art of flipping roti prata requires a lot of practice and arm muscle. This simple fool-proof technique of using a large platter to stretch the dough works well.

Click onhttp://www.storm.sg/food for more recipes and reviews of restaurants.

See also  Two Heads Are Better Than One?