ONE of the first things that strikes you when you read Koh Buck Song’s Brand Singapore book is how the process of branding Singapore has been, and continues to be, planned at the highest levels. 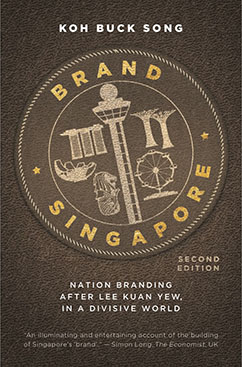 It reflects the top-down approach that pervades the Singapore community. Countries that have been successful in their branding identify their strongest attributes and prioritise policies to strengthen these attributes, and Singapore is recognised to be highly successful.

Its rise from a Third-World country to a First-World nation in quick time is well-entrenched in the minds of many around the world. Singapore has leveraged on its key attribute, namely its geographical location, by developing world-class air and shipping infrastructure as well as crafting robust business and legal landscapes.

As Singapore developed as an economy, attributes that encouraged doing business in the city-state were an integral part of its branding.

Singapore’s branding efforts have had to be constantly tweaked to meet evolving overseas demand and perceptions, especially in sectors like tourism. Koh writes that “to reach the widest audiences internationally, the tourism platform for nation branding remains the most widely accessed, and therefore, the most remembered and powerful”.

Published in 2011, his book Brand Singapore: How Nation Branding Built Asia’s Leading Global City was, in his own words in LinkedIn, “the first independent analysis and critique of nation branding in Singapore.”

The newly released second edition of his book, Brand Singapore: Nation Branding After Lee Kuan Yew, In A Divisive World, provides further insights on how Singapore’s brand has evolved over the years. It incorporates more recent global events like the successful Brexit vote in Great Britain and Donald Trump’s ascension to the US Presidency, as well as local events such as the 2015 Singapore general elections.

To a casual observer, the regular revamping of Singapore’s branding efforts may suggest two things.

First, Singapore is never really sure what it can offer to the world.

Second, Singapore is insecure about what other people think of it.

You could say that Singapore is like the person who always says she knows a better chicken rice shop or nasi biryani stall somewhere else, even if the one she is at serves the most delicious food.

There is a sort of nervousness about whether what Singapore is doing is the right thing. A lot of second-guessing eventuates.

Must Political Change Come From Within?

Drawing In Kids With Art

Now, the city-state’s branding process seems to be at a crossroads. Singapore has to redouble its efforts to remain relevant in a fast-changing regional and global environment. Cities and countries in the region are catching up with their own branding propositions that can potentially challenge anything that Singapore has to offer.

For example, while Singapore is still a gateway to Asia, Bangkok and Kuala Lumpur are not far from ownership of that description too. Anyway, who says there has only got to be one gateway to Asia? Each of these cities has its own strong attributes, but Singapore does not have the population or hinterland that Bangkok and Kuala Lumpur can draw upon.

It’s only a matter of time before the gap between what Singapore and other cities in the region can do or offer completely disappears.

Before that happens, Singapore may have to reassess how it revamps its brand propositions. Let’s assume that the main driver of branding efforts remains to grow Singapore’s economy. It is a massive economy for such a small country and sustaining it creates big headaches for the government vis-à-vis where the next sources of growth are to come from.

If Singapore’s past branding efforts were geared towards growing the economy independently, then the next phase of growth for Singapore’s economy may have to come through alliances with countries and cities closer to home.

Joint branding partnerships may have to be factored in going forward. To this end, nearest neighbours Malaysia and Indonesia should be the first ports of call.