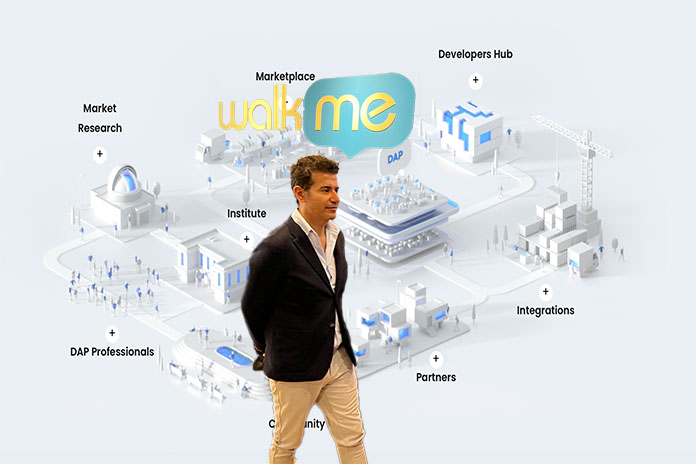 INSPIRED by a mother’s struggle with technology, a son and his friends thought their way through the problem and came up with a global solution.

At every level in society we are confronted by technology. The older generation is sometimes left baffled by online instructions on service websites that can frustratingly lead to dead ends. Businesses are often run by many apps and programs that are hurriedly brought together and sometimes have difficulty working in tandem.

It’s challenging working these disparate apps on their own, but how can it be made into a seamless experience for the customer?

In the case of Dan Adika’s mother, she was constantly trying to remember the steps involved in managing her online banking account. Adika, then a software engineer at Hewlett-Packard and former honoree of the Israeli Army’s Elite Computing Unit, talked through the issue with his friends.

Rafael Sweary (pictured above), a serial entrepreneur and investor, joined the garage huddle and was part of the team that envisioned WalkMe in 2011, a simple helping hand to guide you through tasks on your computer, regardless of the platform.

The co-founders developed WalkMe’s Digital Adoption Platform (DAP), a no-code software platform that is constantly learning and improving itself by machine learning and artificial intelligence.

Works On Any Platform

WalkMe is application-agnostic and creates a transparent overlay that guides users through the next steps while they work. The invisible layer delivers intuitive tip balloons and tools when they are required. At the back end of the business, it speeds up task completion and reduces errors.

It also spots areas that could be improved and opportunities that might have been missed. The analytics helps to improve business processes and reduce friction.

And the key for every business, it helps the bottom line.

The NASDAQ-listed company’s award-winning technology has been well received in the West and it has just opened its Asia-Pacific headquarters in Singapore.

With more than 35 million users in over 40 countries, and almost a third of the Fortune 500 firms using it, WalkMe is the pioneer of DAP technologies.

In 2018, EDBI, the international investment arm of Singapore’s Economic Development Board, invested in WalkMe.

“Singapore’s position as a global innovation hub and digital nation made it an ideal base to build a truly regional operation and a centre of excellence for Asia Pacific,” commented Sweary, who was in Singapore to open the office.

Together with EDBI and the Infocomm Media Development Authority (IMDA), two agencies pushing the smart nation initiatives along, the aim is to have WalkMe lend a guiding hand to any of the 37,400 international companies headquartered in Singapore, and many others in the region.

For a smart nation with an ageing population, every bit of assistance to walk its population through changing times is a step in the right direction.