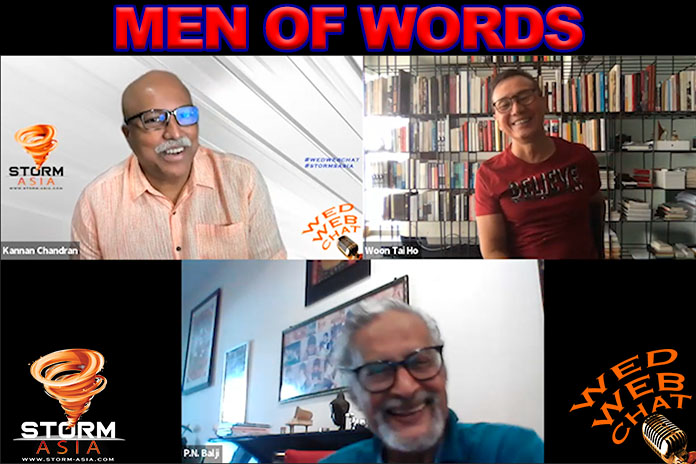 In the WED WEB CHAT — Men Of Words, Singapore’s media veterans PN Balji and Woon Tai Ho talk about the media scene, the state of the nation, and the reasons for writing books.

Tai Ho’s upcoming book, Transition The Story Of PN Balji, will be launched on 21 May 2022. In it, Balji comments on the media scene under 3 Prime Ministers — Lee Kuan Yew, Goh Chok Tong and Lee Hsien Loong — and how the media once played a stronger role in standing up to the system, for the greater good.

Balji voiced his faith in chief editors of the time — Peter Lim, Cheong Yip Seng and Leslie Fong — who stood up for the opinions of the writers.

But in the current, vastly changed media landscape, and with social media prevalent in the news process, very few towering characters remain in the mainstream media.

And much has also gone out of hand.

Transition is also about Balji’s 2nd Act after retirement.

What will he do next?

How will the Singapore of the future sit with him?

He says ageism will be a challenging factor to deal with, along with rising costs.

Leadership styles differ among the PMs that Singapore has had, reckons Tai Ho, who asks Balji if the eventual 4G candidate will do an effective job when he takes over.

Balji reckons it’s best to be prepared and explains the steps he has taken.

Watch video highlights of the discussion below. The full WED WEB CHAT — Men Of Words is at the bottom of this article.

Woon Tai Ho asks PN Balji what he thinks of Minister Lawrence Wong as the next Prime Minister.

Balji reckons the Minister has handled the COVID-19 situations and his role as Finance Minister well. But he wonders if can make the hard decisions when it comes to a crunch.

PN Balji recalls the time he defied then Prime Minister Lee Kuan Yew by running an article that so angered the PM, he summoned the paper’s leadership for an explanation.

Balji thought that was the end of his career, but a supportive Editor in Chief, Peter Lim, and senior management rallied around him and soothed ruffled feathers.

Now that he’s out of the media company, Balji still feels it’s important to push the envelope but do it responsibly.

Watch the full discussion of WED WEB CHAT — Men Of Words below.