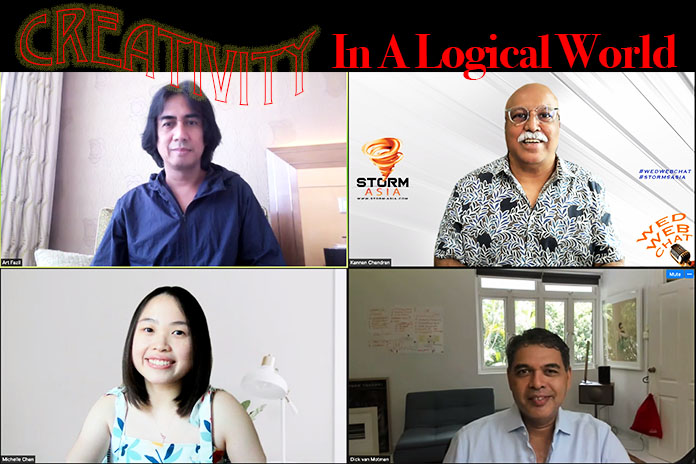 HOW can we encourage a coming together of creativity and logic in a country  increasingly reliant on technology?

The recent closure of the YALE-NUS programme caused concern in some quarters. The official reason was the lack of funding, which may not have been the case if it were a technology institute.

Do we not value the liberal arts or the creatives in our midst?

Singer/songwriter Art Fazil points out that the lack of a local entertainment industry has resulted in the tap being turned off when foreign talent cannot enter due to the COVID-19 situation.

“Singapore is a hall for hire,” he says. And the halls are empty.

Technology, while omnipresent and used to lead us further ahead in the  world, is also being put to creative use.

Michelle Chan, an SMU student, dabbles in art but reckons there isn’t much demand for it.

Dick van Motman, appreciates the role of technology and admits it can be distancing for the creatives. But these are just tools, which could amplify your voice, he reasons.

Art, Dick and Michelle are panellists in the WED WEB CHAT — Creativity In A Logical World.

Some highlights are featured in the videos below. But a lot more was discussed, which you can watch in its entirety at the bottom of this article.

Do We Support Local Creativity?

Is there a sense of nationalism about the creative output of Singapore’s talent? Art Fazil reckons there is some, but probably not to the extent of what you see in the neighbouring countries.

There are some local acts that are well received but given a choice, artists will choose to record in English rather than Malay.

The recent closure of the Yale-NUS programme in Singapore due to lack of funding raises questions about the viability of liberal arts here.

Art Fazil talks about why local creative talent have decided to up and move to other countries. The lure of bigger markets is enticing.

Dick van Motman admits money still rules, but you can still access the necessary tools and make something of your creativity.

The pandemic has shown that a thriving creative industry helps the creatives continue their craft when foreign acts are not allowed to entertain.

In Singapore, which Art Fazil considers “a hall for rent” the sudden switching off of international acts has resulted in a dearth of activity due to the inadequacy of the local creative eco-system.

Watch the full discussion of WED WEB CHAT — Creativity In A Logical World below.

Time To Dip Your Toes Into Crypto

Peranakan Culture On The Uptrend