That doesn’t sound like good advice, but it would seem to do the trick at The Library.

These two strange bedfellows have collaborated to create five special cocktails inspired by TCM — each featuring a selection of Chinese herbs like schisandra fruit, momordica fruit, goji berry, and liquorice.

Not the most appetising list of ingredients but these cocktails will find themselves in good company at The Library’s already eclectic menu of inventive mixes.

Not exactly the most sought after items on the menu, it’s understandable once you’ve had some. 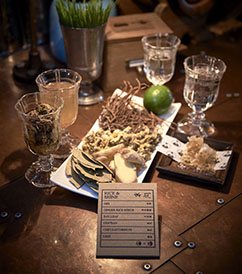 The cocktail I tried — the gin-based Rice & Shine — tasted medicinal as expected.

Many of these Chinese herbs do leave a strong after taste and a jigger full of liquor does little to mask that. Expect cough syrup, saccharine sweetness, and traces of herbal candy.

It is an acquired taste to say the least.

And all this to break the long held perception that TCM is only for “your grandparents” says Serene Seow, Eu Yan Sang’s Managing Director.

“We have to keep innovating to reach out to new and different audiences,” she adds.

Seow says that there has been an increasing demand for “natural health products” from a younger market and expects it to grow in coming years.

“If we can engage and educate young people about the benefits of Chinese herbs, the uptake and adoption of the product will definitely increase,” declares Seow.

For now, that might be medicine that’s hard to swallow.