THE ROUNDS of lo-hei began in earnest a week or so before Chinese New Year, and will continue for another fortnight until chap goh mei on March 2.

Most of the tossing for luck, a commercial endeavour concocted in Southeast Asia in the 1970s, has been conveniently worked into the psyche of the festivities.

Also called yusheng, the prosperity toss is usually conducted in the round, with shredded vegetables, raw fish (or smoked salmon if the outlet is worried about food poisoning complaints) and a variety of sauces and condiments tossed together, elevated and dropped for good luck. Everything has significance and is guided by a medley of invocations for prosperity in the year to come. 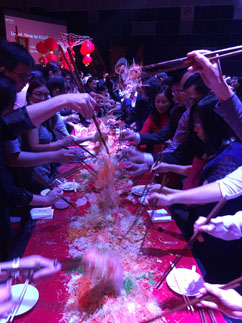 One of the more elaborate lo-hei sessions I’ve experienced has to be the show put on by Suntec Singapore Convention & Exhibition Centre in its convention room.

The long, zig-zag table was laden with the necessary vegetables. The wait staff brought in the salmon and other oils, sauces and condiments and the show began.

With gusto, the 200 people at the long table tossed and shouted for good luck, abundance and prosperity.

Unlike other restaurants, where more than half of the food on the plate winds up wasted on the table and isn’t consumed, here, everything could be lapped up.

The feasting proper involved a buffet spread set up in various parts of the room. From Western to Asian fare, main courses and desserts, it’s a wonderous spread to spread out and wander and feast on.

Priced at $70++ per head, you should gather at least 150 of your colleagues, or family and friends, or maybe the neighbourhood, to toss in the luck and the dog.