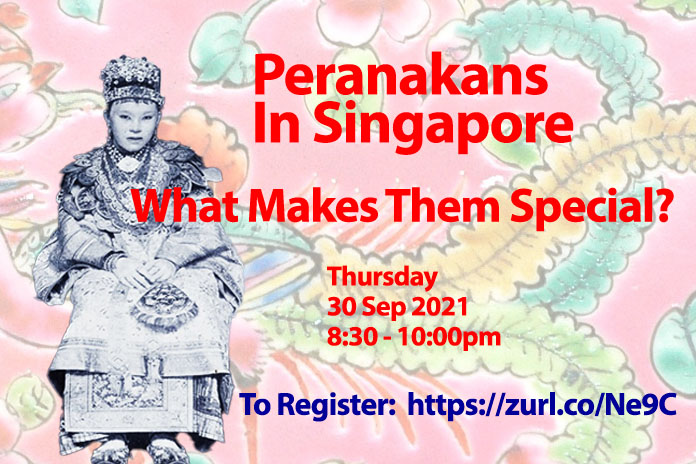 THE vibrancy of the Peranakan culture is a feast for the senses.

From the aromatic cuisine to the delicate fabrics, bold designs and expressive language and demeanour, this hybrid community weaves a rich tapestry of races and religions into a colourful community that has been part of Singapore’s multi-racial make up.

The Peranakans’ rich history is the result of inter-marriage between migrants and locals, resulting in communities that have assimilated the local mores of their adopted homes in Singapore, Indonesia and Malaysia. While most people associate the Peranakans with the communities from China who migrated to these parts, there are also Peranakan Arabs, Peranakan Dutch and Peranakan Indians.

The Peranakans in Singapore and Malaysia hailed largely from the Straits Settlements — from Singapore, Penang and Malacca. In Indonesia, the Chinese migration of men to the country led to many marriages with the local women, resulting in a well-established Peranakan Chinese community in the Indonesian archipelago by the mid-19th century.

This is but a simplistic perspective of a culture that has blossomed into a rich melting pot of ingredients, that, over the centuries, has developed to stand alongside the local and other immigrant cultures.

In researching his family tree, Dr Marc Rerceretnam discovered more than he’d expected and intended to achieve. The sixth-generation Peranakan grew up in Singapore and migrated to Australia, where he lives with his wife and three daughters. An independent researcher, he has a Ph.D. in Economic History.

The research resulted in A History Of Immigrant Roman Catholics And Converts In Early Singapore 1832-1945, a deceptively titled academic-sounding book filled with insights. Picking up from Dr Receretnam’s book, this STORM discussion gathers other members of the community in a casual post-prandial Peranakan chat.

Peranakans In Singapore: What makes them Special is a discussion open to anyone keen on finding out more about the Peranakans. Join in on Thursday 30 September, from 8:30pm to 10pm (SGT). Register via this link: https://zurl.co/Ne9C

Dr Receretnam argues that the Singapore Peranakan community has developed in its own special way, and the session will discuss some of these circumstances and the future of the community.

“Beginning in 1832, this story is about the meeting of different cultures, who are united under a newfound religious faith,” Dr Rerceretnam explains.

“The open and friendly demeanour of the Malay world made the rise and spread of Peranakan communities and culture possible. It rose from a multitude of vastly different sources; from trader settlers and sojourners to even colonial invaders.

“Recently, a new Singapore-specific branch has been identified.

“While most other communities at this time were bound by some degree of clan, racial affiliation or language, the newly formed Roman Catholic community was different. From its early days, it was an amalgam of people from different backgrounds.

ALSO READ: In Your Ears

“It is possible that divisions did exist, but there were also more opportunities to overcome them than previously recognised.

“In effect, this community predates modern concepts of multicultural and multiracial Singapore by at least a century.”

Also joining the STORM discussion as panellists are Alvin Mark Yapp, the founder of The Intan, a home museum of Peranakan artefacts, Norman Cho, a collector of Peranakan vintage jewellery and the author of The Bejewelled Lives Of The Peranakans, and Monica Alsagoff, a true-blue Peranakan champion who until recently was a committee member of The Peranakan Association Singapore.

Here are their views on the topic.

Growing up in a Peranakan family is fun, heady, colourful and so full of drama — the expression “so drama you” was coined for a reason.

Everything about Peranakans is full of drama — our patois, cuisine, fashion, theatre, music, crockery, furniture, architecture and jewellery. Even our personalities!

We are a unique blend of cultures and traditions. We are a contradiction of cultures, the best blends of Chinese, Malay, Indonesian and Western cultures.

The Peranakan culture is special.

Over a short period of time, we find a unique integration/assimilation of two key cultures in the world  — Chinese and Malay/Southeast Asia Cultures — influencing and impacting almost every facet of the Peranakans’ social life which includes cuisine, fashion, religion, education and  marriage.

We have not witnessed such a similar assimilation of cultures of its kind in any other migration community in modern history.

The Peranakans have the enviable knack of marrying the best of many worlds so seamlessly. They evolve, assimilate, adapt and adopt what they perceived desirable and may even re-invent anything to suit their lifestyle.

Peranakans In Singapore: What makes them Special is a discussion open to anyone keen on finding out more about the Peranakans. Join in on Thursday 30 September, from 8:30pm to 10pm (SGT). Register via this link: https://zurl.co/Ne9C